As a result of the Fed’s decision to start to “taper” its Quantitative Easing monetary policy, our main focus is the impact on capital markets and, ultimately, the economy.  In practice, we do this is by monitoring the slope of the U.S. Treasury yield curve over the course of the next few days/weeks/months/quarters. The curve is presently steep, and a curve that continues to be steep will signal the economy’s growth rate remains solid/healthy/accelerating. As a reminder, the slope of the yield curve flattened very quickly after the Fed signaled the end of the first and second rounds of Quantitative Easing and the economy subsequently slowed down. In the panels below, we visually compare the slope of the current U.S. Treasury yield curve against the slope on September 17th (the Fed’s “delayed the taper” announcement), June 19th (the Fed’s “the taper is coming” announcement), and July 31st, 2007 (the flattest curve in recent memory and a foreshadower of the Great Recession). In the lower right panel, we show the slope of the U.S. Treasury yield curve over time using the spread (difference in yield) between the 30-year Treasury and the 2-year Treasury after QE1 and QE2. 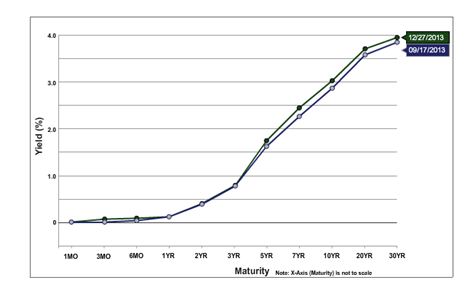 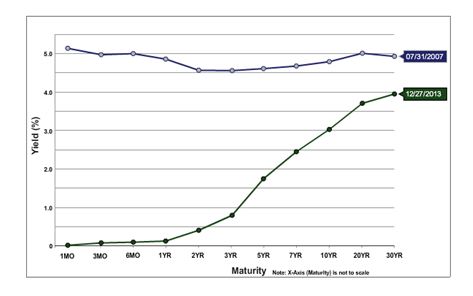 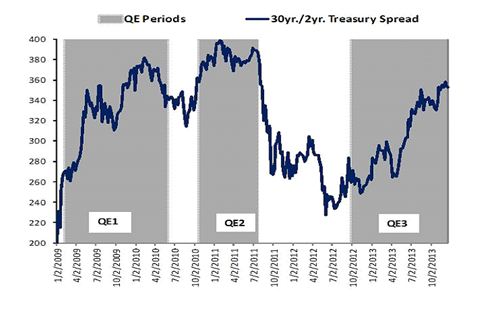 While long-term interest rates will rise as the economy improves and inflation begins to rise, it is extremely rare to enter a recession when we do not have direct monetary tightening (Fed raising short-term interest rates): out of 19 recessions since the inception of the Fed, there has been only one (1945, due to fiscal WWII demobilization) that was not associated with direct monetary tightening. The Fed will begin to unwind (“taper”) its Quantitative Easing program in 2014, but they are nowhere near directly raising short-term interest rates, and our best guess is 2015 before they start.