Of all the world records that were broken in 2019, there was one that was particularly impressive - at least to us.

No, it was not Jennifer Aniston getting 1 million Instagram followers in 5 hours and 16 minutes after she joined. No, it was not Boar's Head's 150-foot, 400 pound world record charcuterie board. And, no, it was not Eliud Kipchoge's 1:59:40 marathon time.

Anyone who is a serious gamer knows that score is absolutely bonkers (you can watch his whole game here to see how he did it!). And if you are a serious gamer, you know only scores on original 1981 arcade machines with four-way joy sticks are considered valid. No computers. No machine emulators. Only the real thing.

The competition for the highest Donkey Kong score, of course, started right after the game came out (you know you competed with your friends!), but it really took on new popularity after the incredible 2007 documentary The King of Kong: A Fistful of Quarters came out. The film follows Steve Weibe and his attempt to capture the high score from the previous record holder, Billy Mitchell (a controversial figure who the New York Times describes as a "hot-sauce entrepreneur and former champion known for his thumbs-up poses and patriotic ties"). To say it started a whole new generation of Donkey Kong players is an understatement. Below is a timeline of Donkey Kong world records since the game's inception:

Don't worry, the fact that the U.S. equity market also hit a "world record" in 2019 is not lost on us either. Capital markets truly put in an amazing year; below are the 2019 1-year total returns for each asset class we track: 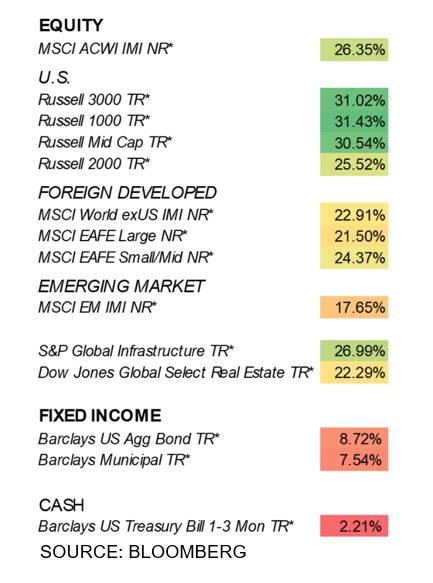 The fact that every asset class except for cash returned more than 5% is extraordinary and extraordinarily rare. Ned Davis Research put out a very interesting chart below highlighting the awesomeness of 2019:

There are three interesting observations from this chart:

Who knows what new world records will be set in 2020 (Donkey Kong or otherwise)? Our guess (unfortunately) is that the asset class return experience this year will not be as great as 2019 but should be better than 2018.