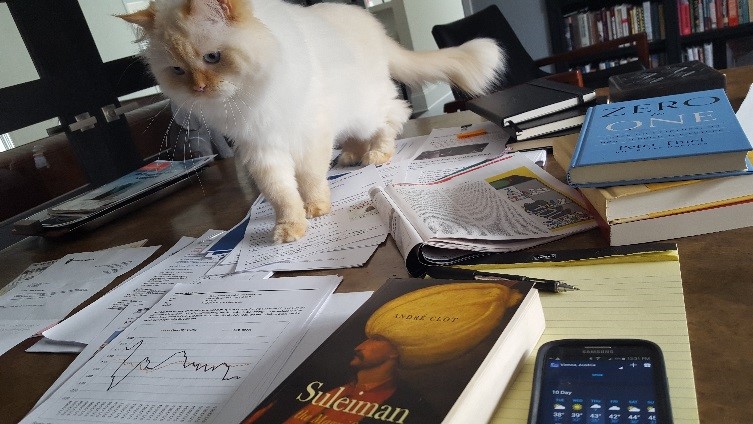 Based on recent casual conversations and our own subjective gauge of the collective social media temperament of the times, the recent terrorist attacks in Paris have affected the world more than other recent episodes. Despite Paris being across the ocean, this one hit close to home and felt really "9/11ish." The pervasiveness of how fast news flows across social media, something that did not really exist in 2001, compounds our individual emotions into the aggregate spirit of the times. For the past week that spirit has been the collective feelings of sadness, fear and anger.

As crazy as it sounds, the events in Paris may not have happened if not for the weather in Vienna, Austria and a Polish "Lion.”

During the 16th and 17th centuries, the Ottoman Empire was at the height of its power and occupied what is now Eastern Europe, Western Asia, the Caucasus and Northern Africa. Under the rule of Suleiman the Magnificent, the empire's longest reigning king (who is also given credit for the rise of its "Golden Age"), the Ottomans wanted to extend its empire and its Islamic religious beliefs east into what is now Western Europe. After a successful spring and summer war campaign in the Balkans in 1529, Suleiman arrived in Vienna during late September, under-supplied and under-prepared for the European rainy season and an unseasonably heavy snowfall. After trying to wage war in these conditions, the Ottomans were promptly defeated during the first Battle of Vienna. They retreated and concentrated efforts in the Mediterranean with mixed success.

The Holy Roman Empire in Western Europe remained unchallenged by the Ottomans for another 150 years until Kara Mustafa, the Ottoman military general serving under the emperor (and Suleiman's great-great-great-great grandson) Mehmed IV, rolled into Vienna during 1683 for another go at it. This time around it was not the weather, but rather the battlefield heroics of the great Polish King John Sobieski during the second Battle of Vienna that put a final end to the Ottoman's Western European aspirations. After defeating the Ottoman army, he became known as the "Lion of Lechistan," and Pope Innocent XI called him the "Savior of Vienna and Western European civilization."

If the Lion was not successful way back in 1683, Europe could have been a very different place today. Matter of fact, given our current career choice and how the roots of today's stock and bond markets started in Amsterdam and the early city-states of Italy, we may have a completely different career today!

One of the ways we deal with the investment environment is through our understanding of multiple macro perspectives, e.g., big, thematic thinking about social trends, demographics, geopolitics, economics, etc. We do this with the full disclaimer that the world can be a completely different place if just one or two events take a different turn. Ever since the fall of the Berlin Wall in 1989, geopolitical instability has become a bigger force to reckon with when contemplating investment strategy.

Of course the world has always been unstable, but today countries and economies are more global and interconnected than ever before. In addition, investment markets have become more democratized. Said a different way, over the last 40 years investing has transitioned from something only a small group of rich people actively did to something that is broad-based and spread across the population, as more people actively invest for themselves through savings and retirement accounts. Therefore, the concern of geopolitical instability is propagated across more people and, therefore, more subject to the "spirit of the times."

Similar to 9/11, the world's response to this cowardly, barbaric and extremist act has the potential to be one of those events that, when we look back, changed the course of history. Only time will tell where all of this is headed and the ultimate impact on geopolitical instability.

The opinions expressed do not necessarily reflect those of author and are subject to change without notice.