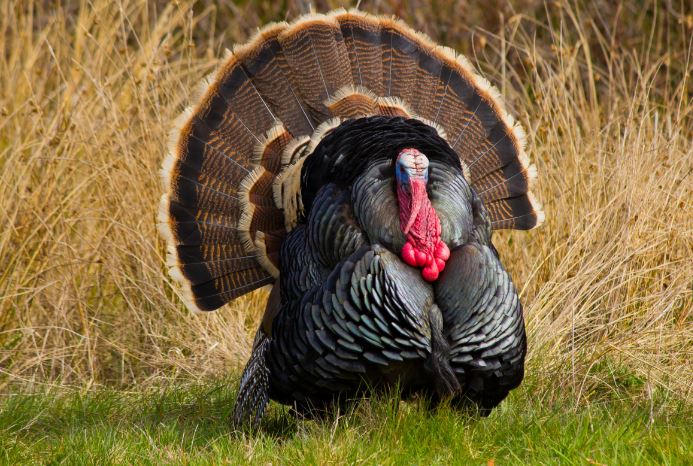 Back in the late 18th century, we think the turkey got the shaft.

There were many official government committees that worked on designing the Great Seal of the United States, which we know ended up being the bald eagle. While we are not sure the turkey was seriously considered, it should have been. Native to the U.S., the turkey is more intelligent and aggressive than an eagle, which is a lazy scavenger and really nothing more than a pigeon with better eyesight and claws. Benjamin Franklin, a member of the first seal committee in 1776 and an early advocate of the rattlesnake, later compared the turkey to the eagle in a 1784 letter to his daughter:

For my part, I wish the eagle had not been chosen as the representative of this country. He is a bird of bad moral character; he does not get his living honestly. You may have seen him perched in some dead tree where, too lazy to fish for himself, he watches the labor of the fishing hawk and, when that diligent bird has at length taken a fish and is bearing it to his nest for his young ones, the bald eagle pursues him and takes the fish. With all this injustice, he is never in good case. For in truth the Turkey is in comparison a much more respectable bird, and a true original native of America. Though a little vain and silly, a bird of courage, and would not hesitate to attack a Grenadier of the British Guards who should presume to invade his farm yard with a red coat on.

We are not sure how the traditional Thanksgiving meal would have evolved over time if the turkey was our national symbol, but one thing we do know is that the turkey you ate last week was much larger than the turkey Franklin championed over 200 years ago. Back then and really through the early part of the 20th century, the average weight of the turkey was around 13 pounds. (Business Insider) Then American turkey farmers got hip to breeding birds specifically for their size and speed to get big, and today the average size of the Thanksgiving turkey you ate is around 30 pounds! (Even with the massive increase in turkey size, we are convinced Franklin would still think the eagle was a lazier bird.)

Another thing that has grown compared to history is the recent move in interest rates! The week ending November 11th (immediately after the election) saw the largest weekly increase in the 10-year Treasury Bond yield since 1962, which is as far back as our data set goes, noted in the chart below: 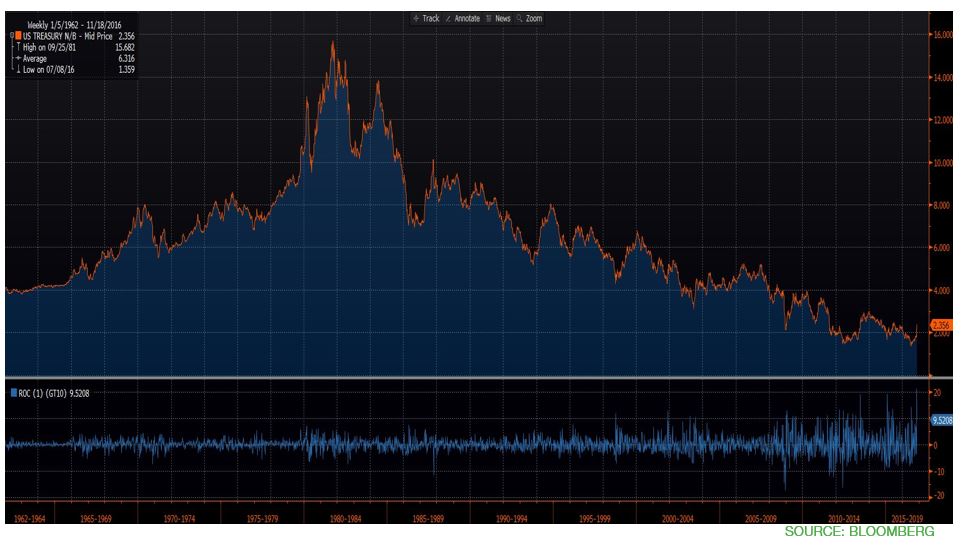 Here is the rationale: capital market participants very quickly came to the conclusion that President-elect Donald Trump could deliver a number of pro-growth economic initiatives, including:  (1) overhauling our tax policies to make corporate tax rates more globally competitive, (2) lowering personal income tax rates, and (3) increasing direct federal stimulus in the form of more infrastructure spending. All of these things would increase the productive potential of our economy, meaning demand, and would result in higher inflation. With higher inflation should come higher interest rates.

Our gut feeling is that immediate market reaction may be a bit overdone, and some may even second guess their market positioning — much like Franklin's feelings on the turkey!