Tanitoluwa Adewumi is a chess force to be reckoned with.

Long-time readers know we are big fans of chess (see here and here). Over the last three weeks, he has taken the chess world by storm (watch out Carlsen!). Oh and, by the way, he is only eight years old, a Nigerian refugee living in New York City and homeless!

“In a homeless shelter in Manhattan, an 8-year-old boy is walking to his room, carrying an awkward load in his arms, unfazed by screams from a troubled resident. The boy is a Nigerian refugee with an uncertain future, but he is beaming.

He can’t stop grinning because the awkward load is a huge trophy, almost as big as he is. This homeless third grader has just won his category at the New York State chess championship.

Much of the news of the last week has focused on wealthy families buying access to great universities, either illegally through bribes or legally through donations. There is no question that America is a tilted playing field that gives wealthy children huge advantages.

So we should all grin along with Tanitoluwa Adewumi, the newly crowned chess champion for kindergarten through third grade. He went undefeated at the state tournament last weekend, outwitting children from elite private schools with private chess tutors.

What’s even more extraordinary is that Tani, as he is known, learned chess only a bit more than a year ago. His play has skyrocketed month by month, and he now has seven trophies by his bed in the homeless shelter.”

For those readers who play chess competitively, you should know a year ago when he entered his first tournament his rating was 105 (the lowest for any participant). It is now 1587 and moving higher (Carlsen — the best in the world — is rated 2845). Winning the New York state tournament, which is the most competitive in the nation, is no joke.

And he went undefeated against all opponents!

Do you know what else is undefeated? Since WWII, U.S. equity returns 12 months after midterm elections have been positive (18 for 18) and averaged 14.5% in all periods (see chart below). 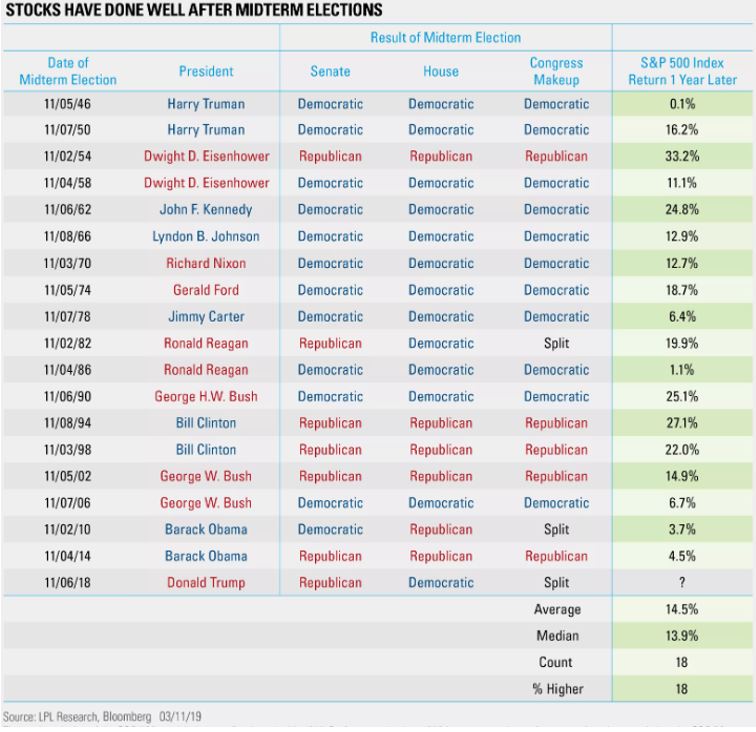 This so-called "presidential cycle" for equity returns adds to our recent observations that U.S. equities may be in for a decent return in 2019.

Recall back in February, we said valuations for the stock market are back to the long-term average. Earlier this month we also pointed out if the Fed can deliver a "soft landing" with its control of short-term interest rates, history suggests equity returns will be "undefeated" when it happens.

We are just as excited to watch Adewumi's pursuit to be the youngest grandmaster in history as we are to watch the pursuit of U.S. equity returns in 2019!

As Chief Investment Officer, I am responsible for the firm’s adherence to its investment philosophy and the execution of its investment process by leading and articulating Sequoia’s...