Recently a number of higher profile retail companies have reported very poor 2013 holiday and December sales and earnings results including Best Buy, Wal-mart Stores, Target, and Coach just to name a few. The SPDR S&P Retail ETF (XRT) is a good proxy to show how the aggregate retail company stock prices have reacted to the negative news; clearing there is a break in the upward trend that was in place since the beginning of 2013:

While stock market moves are the best leading indicators and need to be respected at all times, historically retail same-store sales numbers and earnings reports have not been a reliable leading indicator on the long-term health of the consumer or, more broadly, the economy. There are a number of possible explanations for the poor performance recently including very high holiday sales expectations, intense competitive industry dynamics, and the brutal winter weather.

Another possibility that is finally starting to gain traction is the secular decline in bricks-and-mortar/physical store retailing. The U.S. retail landscape is drastically overstored as measured by the very long-term secular decline in both sales- and profit-per-square-foot…there are simply way too many stores out there. Having way too many stores vs. the online offerings such as Amazon, eBay, etc. is not a great competitive position to be in. This will play itself out over the next few years, but it remains the “dog growing in the cat’s belly”.

The U.S. Commerce Department’s retail sales number reported for December was very strong and continues to show decent strength, but we would start to worry about aggregate retail sales when the 3-month annualized average trend inflects (shown below as the solid back line): 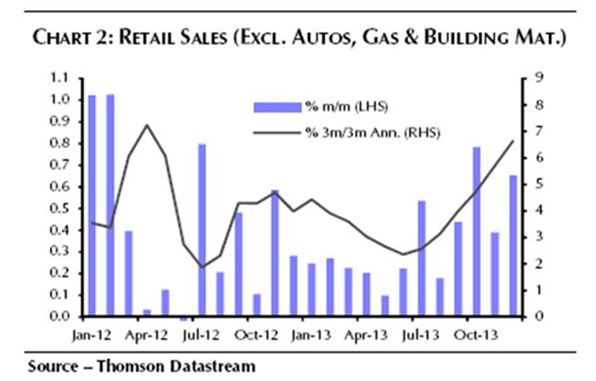 The most important factor for the health of the consumer is job growth, and that is happening somewhat meaningfully despite the media’s take on this: 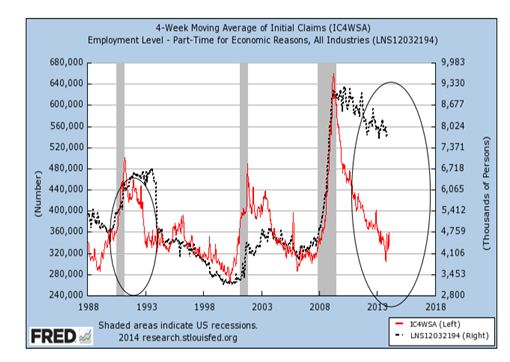