There are often so many deer in our backyard that we sometimes think of it as our own deer sanctuary.

Living at the end of the street, we have great neighbors on one side and dense woods on the other. Other than the three ferocious indoor lions (well, actually, Persian cats) stalking these gazelle-like creatures from the comfort of our living room, the deer do not have any natural predators. Almost like clockwork each spring, this tableau is seen outside our windows:

These two fawns were recently resting and hiding up close to the house while their mother hangs out in the woods. Staying in a location separate from the fawns helps both mom and the kids hide more effectively. The fawns lie perfectly still in order to blend into the surroundings (sort of) until their mother returns in the evening. We see these guys in this same spot for several days until mom decides to lead the fawns to a new hiding place.

While our personal deer zoo population seems to grow at an exponential rate, the annual growth rate of the United States population is declining. The number of children born in the U.S. fell to a 32-year low in 2018. Check out these factoids from a recent Wall Street Journal article:

The most significant implication of slowing population growth is its impact on economic growth.

As we have pointed out many times in the past, the economic potential for any country is a simple formula: the sum of an economy's productivity growth and the growth in the economy's working-age population (those folks between 25-54). Productivity growth can be changed - to some degree - in the short-term, but there is not much you can do about the working-age population growth in the short-term i.e. you cannot create human beings out of thin air!

According to a 2014 World Bank study, the countries of the developed world and China are all currently suffering from slower working-age population growth rates compared to the past without any hope for material improvement over the long-term: 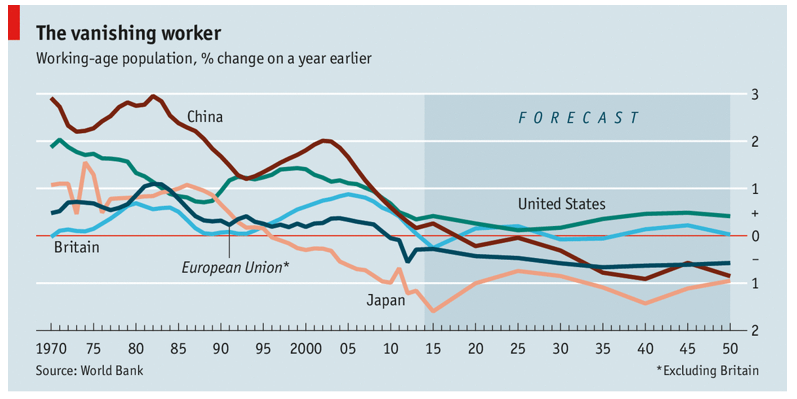 The sobering takeaway here is that the low economic growth rates seen around the globe may stick around for a bit absent a strong productivity growth upswing.

The decline has important implications for the U.S. economy and workforce. The total fertility rate—an estimate of the number of babies a woman would have over her lifetime—has generally remained below the “replacement” level of 2.1 since 1971. A fertility rate falling farther below replacement level means that, without enough immigrants, the U.S. could see population declines and a workforce too small to support a growing segment of retirees. Last year, it fell to 1.7, a record low. That figure remains higher than the rate in parts of Asia and Europe. The total fertility rate in Japan is about 1.4; in Germany it is 1.6; and in Italy it is 1.3, according to estimates from the World Bank.

With a lower ratio of the younger population to the senior population, reallocating economic resources from stuff like technology research & development and improving school systems to caring for the elderly, more funds to pay for senior healthcare programs, and maintaining government-provided pension fund payouts may be in the cards. With fewer younger people comes a smaller workforce to manufacture products and provide services for the rest of the population. This reduction in the workforce may ultimately translate to slower economic growth on a global scale, lower long-term productivity, and higher taxes for the remaining workforce.

From an investment perspective, times may become more difficult due to lower long-term expected returns for stocks and bonds compared to the past 30 years. While we don’t have a crystal ball, and no one can accurately predict the future, we are noticing trends. Sound financial planning is always advisable, but in these rapidly changing times, will be of critical importance. The answer isn’t panic and worry, it’s patience, analysis and planning.

Instead of dire predictions and nail-biting, talk with your financial advisor. In the meantime, go outside and enjoy the spring and your equivalent of a deer zoo!

For more information on this topic, please contact Russell Moenich.