Companies are perpetually faced with four choices of what they can do with the cash they generate from doing business: (1) nothing/let it build up on the balance sheet, (2) maintain or invest back in the business through capital spending/M&A/etc., (3) pay dividends to shareholders, and/or (4) buy back equity from current shareholders (aka share repurchases). There is a common misconception that companies have been using their pent-up balance sheet cash for only massive share buybacks and/or dividends, and not capital spending (defined as expenditures made by companies to maintain or increase the operating scope of their business), but the truth is quite different according to a study by Tobias Levkovich, the Equity Strategist at Citigroup Research: 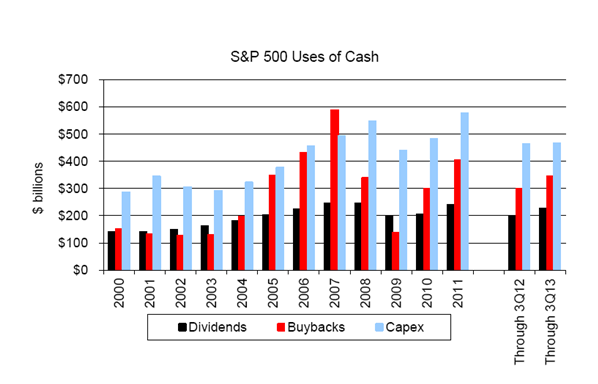 In early January we discussed the importance of capital spending on the economy finally achieving “escape velocity” (i.e., moving from 2.5% GDP growth to something better). As an effective leading indicator of capital spending, the ISM Manufacturing New Orders Index is a good proxy. The forward looking data suggests some of the momentum coming out of 2013 has slowed down (due to either brutal winter weather or something more sinister), but we are still moving in the right direction: 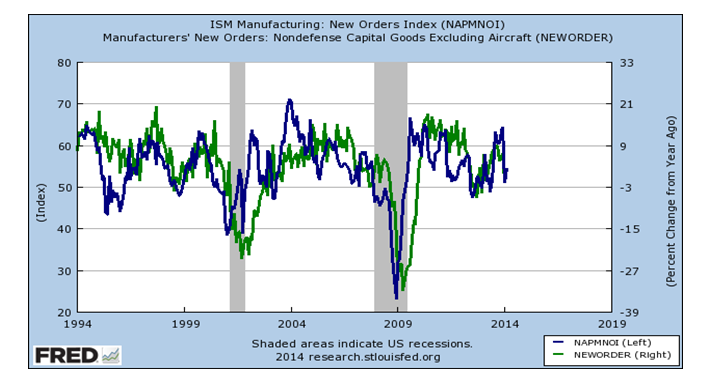 In the last couple of weeks, a number of very intelligent and highly respected Wall Street strategists and thinkers have commented positively on the outlook for increased capital spending in 2014:

• Mohamed El-Erian, the outgoing CEO & CIO at PIMCO, believes “if advanced economies are to prosper, it is necessary (though not sufficient) that the corporate sector’s willingness to invest must match its considerable wallet” and provides six corporate “constraints” that have prohibited capital spending in the past but are now slowly improving:
- The eternal concern about the future demand for a company’s products (a bit of a chicken and egg situation here)
- Outlook in China, the second-largest economy in the world and an influential driver of global demand, is under review
- Though innovation is a key competitive advantage, there is now a “winner take all” outcome which requires a higher investment hurdle rate for success
- Uneasiness about the political operating environment both in the U.S. and in several major areas around the world
- Downside financial risk protection tools (e.g., currency hedges) are not as comprehensive for an increasingly global world
- Anxiety about a post-Fed/loose monetary policy-induced world without artificially repressed interest rates/bloated central bank balance sheets.

• Savita Subramanian, Equity Strategist at Bank of America Merrill Lynch, believes capital spending is poised to improve as shareholders pressure companies to devote even more cash to investment; she believes that would be a great investment now because of:
- Accelerating global growth
- Tight capacity utilization
- Age of capital equipment currently in operation (has never been older!)
- Maintenance capital spending is well below average
- Lending standards have eased

• David Rosenberg, the Chief Economist at Gluskin Sheff, also believes a capital spending boom is coming due to the fact that the aggregate capacity utilization (shown below) for the U.S. manufacturing base is 76%, which is a key level, based on economic history, where moderate capital spending growth cycles start.

• Finally, Levkovich, cited above, has surveyed 725 nonfinancial publicly traded companies and sees that capital spending intentions have increased in the past couple of months despite claims of a slowdown amidst weather distortions and regulatory concerns:
- Capital spending growth is now pegged at 5.0% y/y in 2014 up from a 1.5% y/y expectation in a Q4 2013 survey and higher than the 4.8% gain in 2013.
- If you remove the energy sector, which is roughly 35% of the total capital spending, the picture is even better: 6.6% y/y in 2014 vs. 2.4% in 2013. 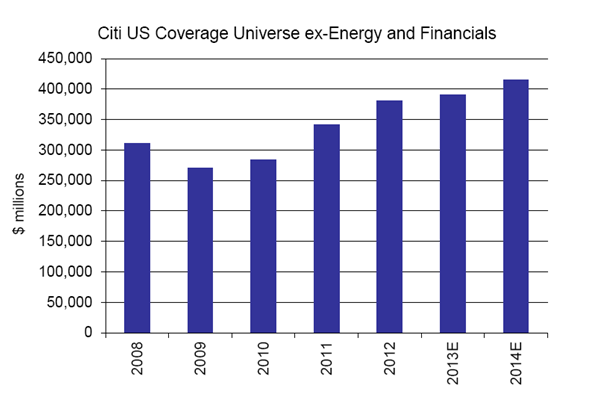 It is reassuring to see we are in good (and smarter!) company— we continue to believe the forward looking indicators of increase capital spending will be accurate.