Seems like every cocktail party conversation (economist or otherwise) eventually turns to the prospects of the U.S. employment situation especially after the weaker-than-expected Bureau of Labor Statistics’ job employment reports in both December and January. The debate (drunken or otherwise) revolves around the driver of the weakness: is it simply winter weather-related or something more sinister like a broader economic slowdown?

“We believe investors should look past the perturbations in the monthly releases and focus on 6- and 12-month moving averages, which are well above the job tallies of the last two months. Although smoothing the data will not capture an inflection point, we can look at leading indicators like jobless claims, confidence trends, and the Fed’s Senior Loan Survey to capture inflection points in advance. These indicators remain consistent with improving job and GDP prospects in 2014. Despite the lackluster headline, there was some good news in the January jobs report: the share of people working part-time for economic reasons fell to a cycle low, while the employment to population ratio for prime age adults rose to a recovery high. We believe the models the Fed is using to calibrate the equilibrium interest rate - and the cumulative effect of Quantitative Easing on a hypothetical short rate - suggest that tapering will continue unless a period of sustained weak data collide with a material and sustained tightening of financial conditions. We do not believe this is likely and continue to expect stronger jobs and GDP data as 2014 unfolds.”

Darda’s observation about the share of people working part-time for economic reasons falling to a cycle low is a good one and refutes the argument that the labor market recovery so far has been more of a function of part-time jobs and not full-time job growth: 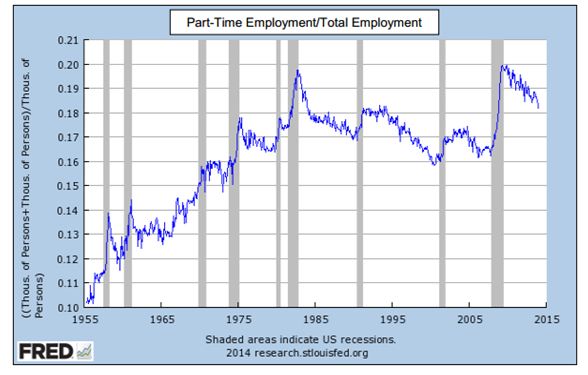 We have a preference for high-quality leading indicators in order to cut through the economic noise, and Darda delivers with these observations:

“The National Federation of Independent Business Hiring Plans (NFIB) Index rose to the highest level since September 2007 in January and has come into closer alignment with the level of first-time jobless claims, which remain near cycle lows. Moreover, the Conference Board’s Employment Trends Index (ETI), a leading labor market index, which incorporates claims, the NFIB data, job openings and several other leading indicators, increased in January with 3-, 6- and 12-month rates accelerating. The Conference Board’s Present Situation Index (cycle high in January) and Fed’s Senior Loan Officers Survey (further improvement in Q1) also tend to lead payroll growth. Lastly, sensitive financial indicators, which have not been disrupted by recent EM turbulence, suggest the labor market outlook remains intact. Thus, the verdict of the leading and market-based indicators is that, despite two months of disappointing job gains and EM financial market turmoil, the outlook for the labor market is one of gradual ongoing improvement, not deceleration or some kind of negative inflection point as many have feared. We continue to expect the 12-month average for payroll growth to rise during 2014.” 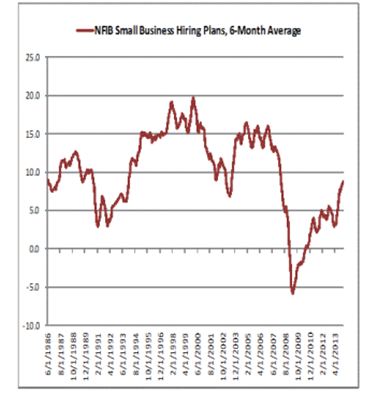