Who would have guessed the legacy of one of the most iconic rock-n-roll guitars of all time started in Cleveland, Ohio?

The tale goes something like this. A very young Joe Walsh, better known now as the Eagles lead guitarist, played in the seminal Cleveland band The James Gang (yes, he is responsible for the licks on "Funk #49" and "Walk Away"). Because the band was a Cleveland favorite, it was picked to open for this little known, up-and-coming British band called Led Zeppelin. Walsh and Zeppelin guitarist Jimmy Page, who had met a few years earlier, got to talking after the show. Page thought the sound Walsh was getting out his Gibson Les Paul was much better suited for the big sound of Zeppelin's three-piece band than his Fender Telecaster guitar. However Gibson Les Pauls were really hard to find at the time — everyone wanted either the Rickbackers or Epiphones the Beatles played.

But Walsh owned two Les Pauls and agreed to sell Page one that eventually went on to become the legendary "Number One" guitar Page used starting on the Led Zeppelin II album. You may be wondering what the cost of the transaction was at the time? In the May 2012 issue of Guitar World magazine, Walsh spoke about the very transaction:

"I laid it on him and said, 'Try this out'. He really liked it, so I gave him a good deal, about $1,200. I had to hand-carry it; plus I flew there and everything. So whatever my expenses were, that's what I charged him... I just thought he should have a Les Paul, for godsakes!"

A good deal indeed for what became a legendary guitar: just the transaction costs of getting it to Page from Cleveland to New York City!

This deal reminds us of the great deal investors are getting these days in terms of investment fees and commission costs. And it is basically a race to zero, which is very beneficial to the average investor!

Up until recently, Vanguard had been leading the race in the mutual fund and exchange-traded fund (ETF) space to lower investment fee expenses, including annual costs for management fees, administrative fees, operating costs and all other asset-based costs incurred by investments: 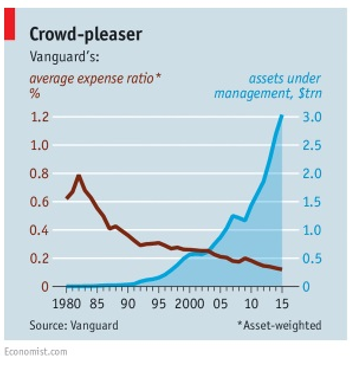 And the industry has followed ever since: 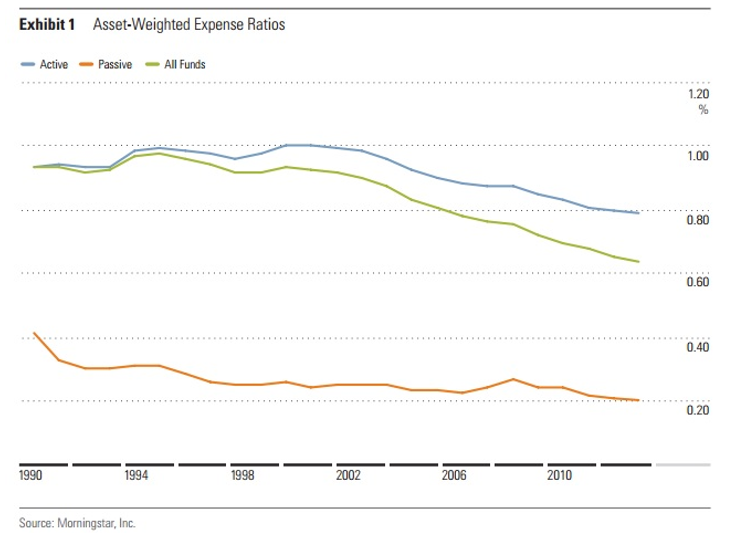 However, Fidelity dropped an industry bombshell when it recently said it was going to lower investment fees on two mutual funds to zero! Our guess — it is only a matter of time before the rest of the industry follows (or goes out of business from a lack of assets).

Declining mutual fund and ETF fee expenses do not tell the whole story, however.

In fact, perhaps what is most telling is the huge decline over the years in stock and ETF commission transaction costs, or the cost an investor pays to a brokerage to execute a trade. The steep reduction in transaction costs has been truly breathtaking, with costs declining precipitously since 1975 when financial industry regulators abolished fixed-rate commissions.

Though the chart below only goes to the year 2000, today plenty of securities trade for anywhere between a total of $0 to $8 per trade no matter what the size. It would have been impossible to put together a cost-effective, broadly diversified portfolio consisting of global equity, infrastructure, natural resources, real estate and fixed income securities back in the day. 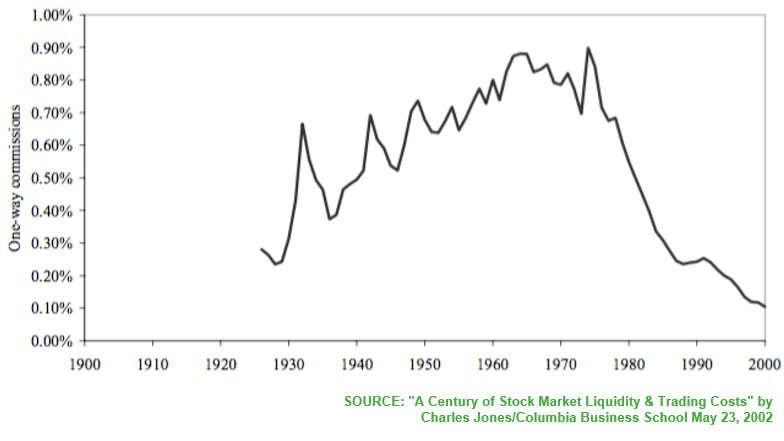 Page got a great deal on his "Number One" guitar and went on to make amazing music. Similarly, investors today are getting a great deal with lower all-in investment costs that should make the potential for future returns even better.