We learned something interesting on a recent flight from Cleveland, OH to NYC.

Those readers who live in the upper Midwest may recall the crazy winds during a 48-hour period in late February. We were arriving into New York late at night on the tail end of that wind as it moved through the Northeast. While we are seasoned travelers, the turbulence was some of the worst we had ever experienced, to say the least. People were freaking out on the plane (of course, we were cool as cucumbers as nothing phases us!). As luck would have it, we were sitting next to a retired pilot and the conversation as we descended went something like this:

Us: Crazy turbulence huh? What's the chance the pilot here doesn’t get the landing right? Come on, be honest you must judge every landing and this one seems like a difficult one.

Pilot: Well I do in my head. But what is going to happen here is the pilot is going to cork the plane - turn it into the wind — really hard right before the back wheels touch down. We will feel the plane turn given the strong crosswind this time, and it may freak you out. And he is going to slam it down hard into the runway in order get to this thing down as fast as possible and not risk a bounce back up into the wind. It is critical he gets it right because of the wind.

Us: Sounds awesome! (As our palms start sweating, we squeeze the armrest a little harder, and dinner does its own hard landing in our stomach).

We find it interesting that a hard landing is the safer approach when landing a big jet airplane. It makes sense when you think about the vectors and the angle of incidence involved. The steeper the angle of landing, the faster the plane slows down into safety.

And sure enough, our new pilot friend was exactly right. The plane "corked" bigtime to the left just before we hit the runway hard. It hit so hard we felt like we were going right through the floor.

Us: Well we made it…what grade do you give it? (and back to being cool as a cucumber).

Hard landings may be the safer approach for jet airplanes, but that is not the case when it comes to the Federal Reserve Bank and the business cycle. As we have said many times in the past, the Fed and its control of short-term interest rates, and ultimately financial conditions in the economy, is the biggest threat to this incredible business-cycle expansion we have enjoyed for the last 10 years. At some point the Fed will tighten financial conditions too much, too fast or both and the economy will fall into recession. 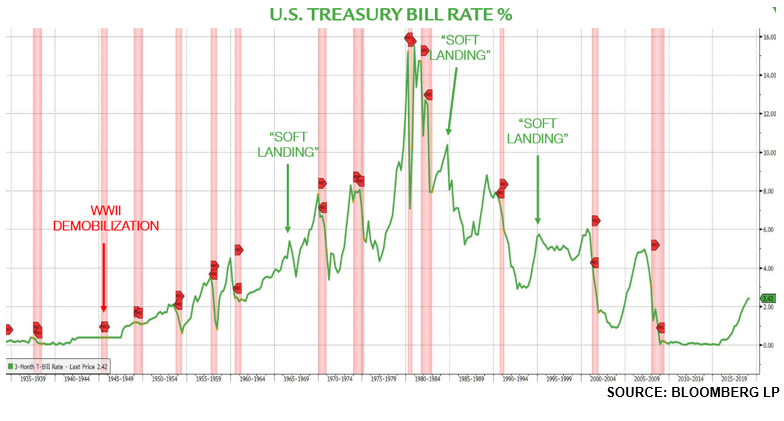 As we review the economic tea leaves in conjunction with the Fed's probable future course of keeping short-term interest rates where they are for all of 2019 (based on recent Fed commentary), it looks like the Fed actually has a great shot of delivering its fourth perfect soft landing.

What is more interesting from an investment positioning standpoint is the fact that U.S. equity markets rallied strongly in previous soft landing scenarios. In the chart below, the blue, orange and gray lines are the trajectories of each of the previous rallies indexed to the recent market low, in this case on December 24, 2018. The red dotted line is the current return on the S&P 500 Index so far since December 24th: 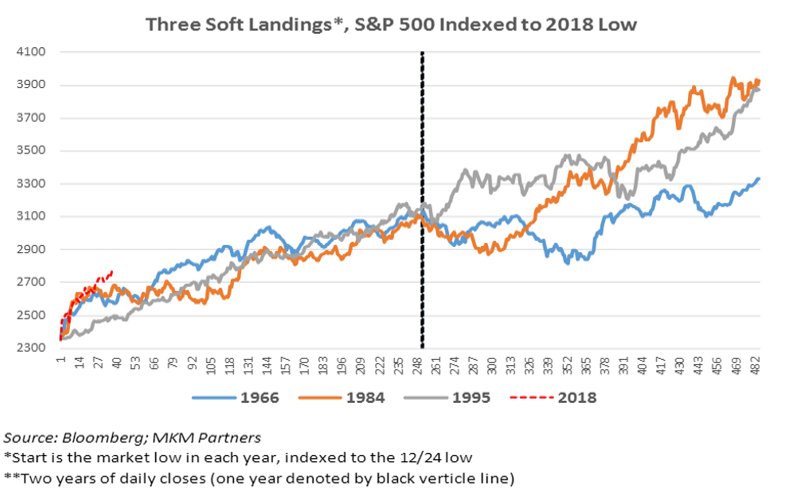 If the Fed delivers the soft landing and the U.S. market rallies for another two years, we would give that an A+ as well!

Contact Russell Moenich to learn more about this topic.

This material is for informational purposes only and is not intended to serve as a substitute for personalized investment advice or as a recommendation or solicitation of any particular security, strategy or investment product. The opinions expressed do not necessarily reflect those of author and are subject to change without notice. Diversification cannot assure profit or guarantee against loss. There is no guarantee that any investment will achieve its objectives, generate positive returns, or avoid losses. Sequoia Financial Advisors, LLC makes no representations or warranties with respect to the accuracy, reliability, or utility of information obtained from third-parties. Certain assumptions may have been made by these sources in compiling such information, and changes to assumptions may have material impact on the information presented in these materials. Investment advisory services offered through Sequoia Financial Advisors, LLC, an SEC Registered Investment Advisor. Registration as an investment advisor does not imply a certain level of skill or training.