Who knows what Jim Morrison, the great poet and singer-songwriter of the classic rock band The Doors, was exactly talking about when he sang the following in the song "Five to One":

Five to one, baby
One in five
No one here gets out alive, now
You get yours, baby
I'll get mine
Gonna make it, baby
If we try.

The old get old
And the young get stronger
May take a week
And it may take longer
They got the guns
But we got the numbers
Gonna win, yeah
We're takin' over

In Riders on the Storm: My Life with Jim Morrison & the Doors, drummer John Densmore suggests Morrison was intentionally obscure with the meaning of the "Five to one, baby/one in five" line. He theorized that Morrison was referencing the ratio of people being born at the time to those who were elderly. At that time, if the current trend of increased birth rates and increased life expectancy had continued, then the ratio of the young people to those over 60 would be roughly 1:5, and they, perhaps, could have taken over!

However, Morrison seemed to be suffering from a bit of a "recency bias" back then. The Doors released the song in 1968. This coincides perfectly with the peak in the world population growth rate (at least going back to 1750): 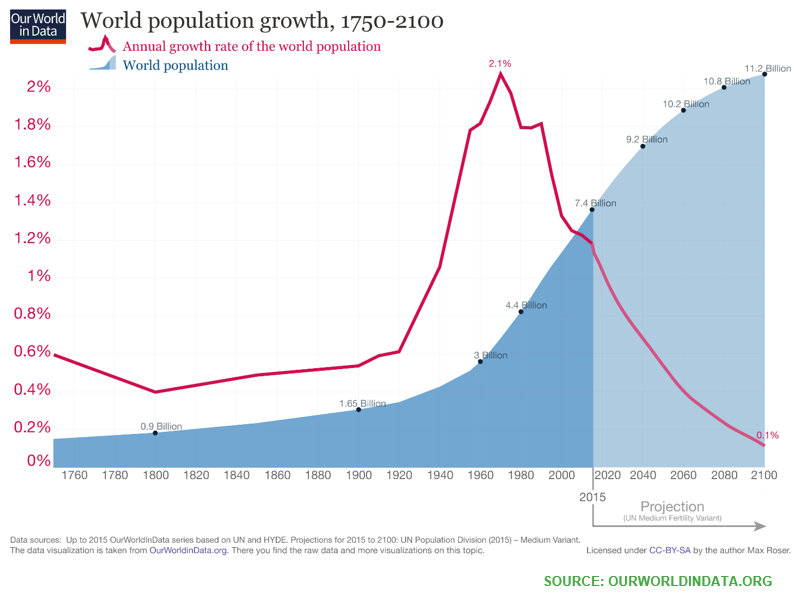 Since the 1968 peak, the growth rate has declined meaningfully, but still elevated relative to the long history. However, the future projections shown above are somewhat worrisome. After several centuries of rapidly growing global population, the end of the 21st century may mark the peak in global population for the first time in recorded human history.

Falling mortality, especially infant mortality, is one of the key reasons population growth began to accelerate a couple hundred years ago. The subsequent slowdown in global population growth has come because of lower fertility rates. According to the Organisation for Economic Co-operation and Development, today roughly half of the world's population lives in countries with fertility rates below the replacement rate. The consequence of higher life expectancy and lower fertility is that the world's population is getting older.

Now that the old got the guns and the numbers, Morrison may be very worried from the grave. But what does this mean for investors?

Therefore, understanding what regions will be growing in the future can be helpful. Extrapolating from current regional population growth rates suggest most of the population growth over the next century will come from the world's least developed, emerging-market economies, while many developed country populations will shrink sooner than later: 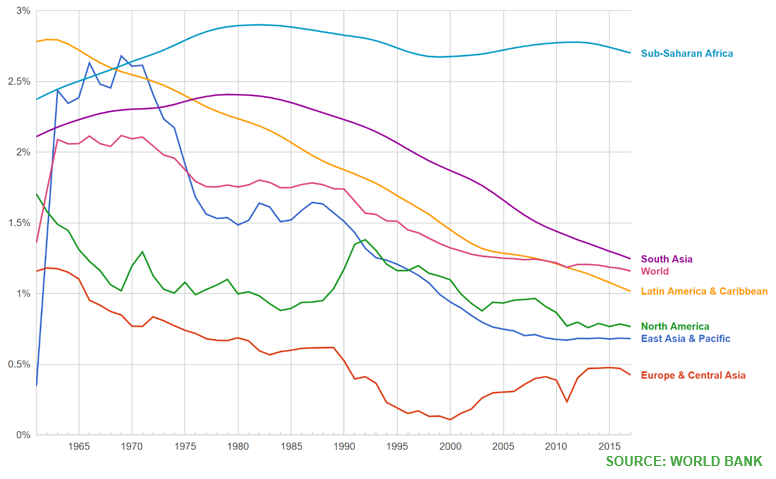 Ned Davis Research, a fantastic investment research firm, breaks down the idiosyncratic demographic trends of the world into the following three buckets:

From our investment perch, there are opportunities to pursue in each one of those buckets. Whether it’s developed market companies that can take advantage of pro-growth demographics or direct investments in countries such as India that can grow at elevated rates — over and above the world growth rate — for long periods of time, we believe a big part of the future of equity returns lie in emerging market exposure.