Call us crazy, but sometimes the Federal Reserves’ monetary policy reminds us of Abstract Expressionistic art.

As maybe the most important contemporary artist living today, Jaspar Johns holds the record for the most expensive painting ever sold by a living artist. His iconic Flag painting (created in 1954) sold for $110 million in March 2010, and is a great representation of his early style: using images from popular and commercial culture such as flags, maps, and targets for subject matter to explore artistic irony, contradictions, and paradoxes both on the canvas and in the aesthetic interpretation by the viewer. Taking the notion of irony a step further, his artistic style abruptly changed directions starting in 1959 with his seminal work entitled False Start—which changed hands for $80 million in 2006 and stands as the 2nd most expensive painting ever sold! Catherine Craft, an art scholar specializing in Dadaist and Abstract Expressionistic art, describes the transition in Johns’ style and his aesthetic underpinnings in her book Jaspar Johns:

“Viewers who had been entranced by the quietly reticent surfaces of Flag, Canvas, and White Numbers were startled by the aggressively bright colors and loosely brushed marks of paint…The stenciled names of colors dot the surface of the painting as erratically as the bursts of brushwork that surround, underlie, and occasionally obscure them. The words are positioned at various angles, but more important, they are patently ‘wrong’— that is, the word ‘green’ is shown in blue, ‘red’ is orange, and so on. These apparent contradictions immediately raise a number of philosophical questions in which language is implicated as unstable and ambiguous: How do we know what we know? How do we acquire knowledge and accept it as such? When we say ‘red’ how do we know that someone else will understand what we mean?”

Similarly, when the Federal Reserve Bank states their upper threshold for inflation is 2% and when recent inflation readings are at this level, we would expect the Fed to have a more “hawkish” (i.e., higher interest rates, vs. “dovish”) posture about increasing interest rates sooner than later, especially with a continually improving employment picture. Based on the latest monetary policy statement for their meeting that concluded on June 18th, the Fed’s committee members did acknowledge an improving economic performance in the last few weeks. They also nudged up their individual projections for short-term interest rates in 2015 and 2016 (see the “dot” chart below) in a modestly hawkish manner in response to the unemployment rate, which is projected to fall faster in the future than previously thought. 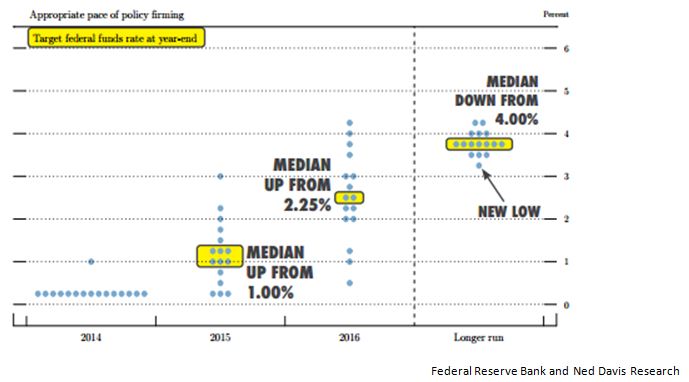 Like the contradiction of the word ‘red’ colored orange in Johns’ painting, Chairwoman Janet Yellen’s comments in her press conference after the statement’s release were anything but “hawkish” and suggested interest rates may remain very low for a longer time despite her confusing comments on inflation:

“So I think recent readings on, for example, the CPI index have been a bit on the high side, but I think it's - the data that we're seeing is noisy. I think it's important to remember that, broadly speaking, inflation is evolving in line with the committee's expectations. The committee has expected a gradual return in inflation toward its 2% objective. And I think the recent evidence we have seen, abstracting from the noise, suggests that we are moving back gradually over time toward our 2% objective and I see things roughly in line with where we expected inflation to be.”

Of all of the commentary we have read since the release and press conference, maybe BTIG Chief Strategist Dan Greenhaus’ explanation of the contradiction makes the most sense:

"The Fed, whether run by Ben Bernanke or Janet Yellen, is in no rush, after so many head fakes over the last four years, to jeopardize the recovery by tightening too soon or reducing accommodation too quickly. That’s it. Full stop."

Our only point of contention: he says “head fakes;” we would say “false starts.”