Our investment process has a litany of "do's" and "don'ts" that help us navigate the uncertain world of capital markets. One of those "don'ts" is to never let politics influence our long-term investment decision making. There are few times throughout history when it would have made sense to suspend that one "don't". On November 9th, 1989, almost exactly twenty-five years ago, the East German government, bowing to rising internal civil unrest and a wave of radical political changes sweeping eastern European-, pro-Soviet Union-, pro-communist-governments such as itself, announced that all East German citizens could visit pro-democratic West Germany and freely travel through the infamous "wall of shame", better known as the Berlin Wall.

Erected in 1961 and stretching 96 miles in order to separate East and West Germany both geographically and ideologically, the Berlin Wall, for all intents and purposes, fell that day along with the regionally oppressive nightmare of communism. Seemingly overnight the Eastern Bloc (former communist countries in Central and Eastern Europe) had access to the global free market system as well as the potential for economic freedom. This positive political change bode well for future investment returns in markets around the world as the cancer of communism was eradicated once and for all. Though not as historic or anywhere near as important as the fall of the Berlin Wall, the mid-term election results here in the U.S. were noteworthy in the sweeping change in the psyche of the American electorate with a potential impact on capital markets.

As a result of sweeping victories at the polls, the Republicans have taken control of the Senate and, in turn, Congress. We do not hold ourselves out as political wonks - we will leave that for the loud mouthed political pundits, paid shills, and narrow-minded henchman of both parties - so our analysis is conjecture at best. That said, without a super majority in the Senate and with the veto power of the President, we do not see much in the way of major policy changes that could be enacted anytime soon. Fortunately or unfortunately, political gridlock in Washington may be the norm until the next president is elected.

All is not lost however. According to Sam Stovall, U.S. equity strategist for S&P Capital IQ, the U.S. stock market - in this case the S&P 500 Index - performs pretty well in “gridlockian” environments. As shown below, the average annual return in the stock index is around 15% when there is Democratic president and a Republican congress: 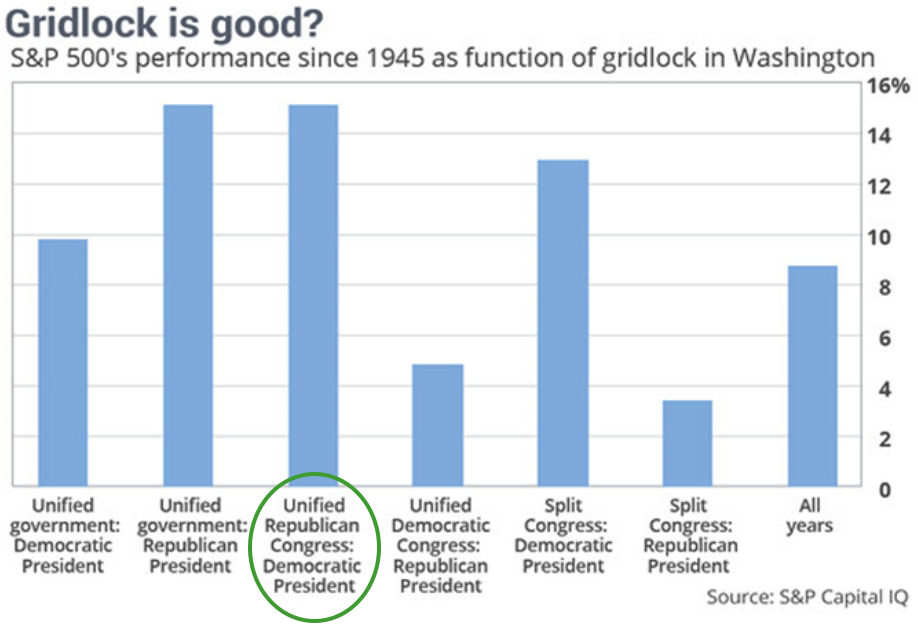 Our friends at Capital Market Consultants (not political pundits, paid shills, or henchmen, but rather true experts in analyzing capital markets) have studied the potential legislative impact of the election results and point out three key near-term issues likely to come up over the next few months that are relevant to the financial markets:

One: The government is currently operating under a Continuing Resolution (CR) to keep the government funded through early December. The expectation is that an omnibus appropriations bill will be passed before the end of 2014, as opposed to another CR, providing much-needed budget certainty to federal agencies and state and local governments relying on federal grants. This should have a positive impact on hiring at the state and local government levels which has seen weak job growth in the last few months.

Two: Besides passing a funding bill, there were also a host of tax breaks that expired at the beginning of 2014 including an accelerated depreciation business tax credit and a research & development tax credit, both of which have been popular in the past. Some and maybe many of these expired tax credits could be extended retroactively. This has the potential to immediately increase investment spending and capital expenditures.

Three: The debt ceiling debate will come up again in early spring. With Republicans in control of Congress, the debate over how to handle the debt ceiling may well become another political lightning rod. It is likely that Republicans will attach policy riders or other unrelated legislation to a debt ceiling bill in order to force the President to sign key policy items into law.

The third issue is the one that may cause the most anxiety for capital markets given the contentious history of the issue. Do you remember how capital markets were paralyzed by the debt ceiling debate in the fall of 2013? It is easy to see how the next showdown could increase financial market volatility as the political deadlock hits the headlines. Unfortunately it is unlikely that any of the elected officials in Washington will be “heroes” and commit to solving our nation's immediate problems. If only they could channel the two young lovers in the great David Bowie song "Heroes" from 1977. The song was written and recorded during Bowie's "Berlin Period" about solving the world’s problems in the shadow of what infamous landmark? You guessed it - the Berlin Wall!

The music history associated with the Berlin Wall is extraordinary in its own right. There are a number of now well-known American music acts that played in West Berlin in the immediate aftermath of the fall of the Wall (Nirvana on November 11, 1989 and the Ramones on November 26, 1989), and the stories from those concerts are now legendary. However, there is only one American artist that played in communist East Berlin BEFORE the Wall fell and has a legitimate claim in fueling the oppressed audience’s desire for freedom and starting a crack in the Wall through American rock-n-roll…

In July of 1988, Springsteen was invited by the East German government – one that loved to censor and suppress any type of art – to play a concert simply to appease the growing tension emanating in its Free German Youth wing. Playing before 300,000 frustrated rock-n-roll fans in his usual epic fashion he delivered a speech (in decent German!) that went something like this:

“I'm not here for any government. I've come to play rock-n-roll for you in the hope that one day all the barriers will be torn down!”

He immediately tore into his classic cover of Bob Dylan’s “Chimes of Freedom.” East Germany would never be the same after that song.

The Standard & Poor's (S&P) 500 Index is an unmanaged index that tracks the performance of 500 widely held, large-capitalization U.S. stocks. Indices are not managed and do not incur fees or expenses. It is not possible to invest directly in an index.

Past performance is not a guarantee or indication of future results.