Stocks had another strongly positive week on lighter summer trading volumes. Investors were pleased to see moderating inflation data from July and continued strong earnings from names like Disney. The S&P 500 was up 3.21% last week, and is now down only 9.34% for the year given the strong rally off the June 16 low2. Bond prices edged up a bit last week and the Bloomberg Aggregate Bond Index was up 0.24%, but it is still down 8.89% for the year as interest rates continue to be highly volatile2.

The Consumer Price Index (CPI) and the Producer Price Index (PPI) data releases last week finally showed a welcome abatement of the pace of inflation. The CPI was unchanged in July compared to June, the first time it has not increased month over month since May 20201. Markets expected a 0.3% increase for the month, so not only did the CPI not rise in July, it also positively surprised, which helped market sentiment1. Similarly, the PPI positively surprised by falling 0.5% in July versus consensus estimates of a 0.2% increase1.

Energy was the largest factor reducing inflation pressure in July in both indices owing to the double-digit drop in gasoline prices1. Core CPI, which excludes volatile energy and food prices, increased 0.3% in July1. Core PPI increased 0.2% in July1. Also, the Core CPI is still running at 5.9% year over year and the Core PPI at 7.5%1 year over year. Bottom line: while we welcome the softening in headline inflation data, we remain cognizant of the fact that the data is still far from the Federal Reserve’s 2% year-over-year inflation target. As a result, we expect the Fed to continue to raise interest rates in the coming months, even if they slow their pace from the recent 75bps hike given moderating inflation data. These rate increases, even if smaller, will chip away at economic and corporate earnings growth in the months ahead. We also remind investors that the large rate hikes the Fed has already made this year will have a lagged impact, so they will continue to affect the economy and earnings well into 2023.

We think the tug of war between the Fed and the economy is far from over and that investors should not let their guard down after the recent equity rally. The bond market remains skeptical of growth prospects, as evidenced by inversion of the 2-year/10-year Treasury yield curve (the 2-year yield higher than the 10-year yield) since July 6 1. The 3-month yield minus the 10-year is also getting closer to zero1. Historically, when the 3-month and 2-year yields have stayed above the 10-year for a few months, recessions have ensued around 12-18 months later1. We still think it’s possible for the U.S. to escape the current high-inflation situation without the Fed having to drive the economy into a severe recession in order to do so (like the early ‘80s), but we will stay focused on the bond market for insight. Our team is dedicated to patience, balance and discipline in the management of strategies in this uncertain environment. 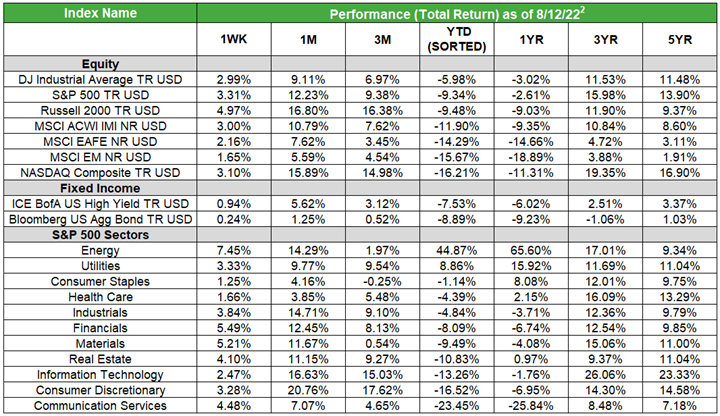 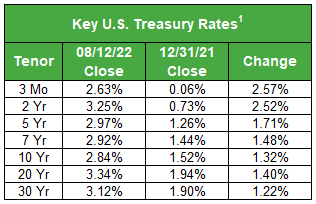