It’s easy to discover what is on the minds of the average American today (at least based on their Google search history shown below!). Googlers are searching for information on the new, extremely scarce, but supposedly delicious-and-better-than-Chick-fil-A chicken sandwich from Popeyes; the new Taylor Swift album; and…inverted yield curves! 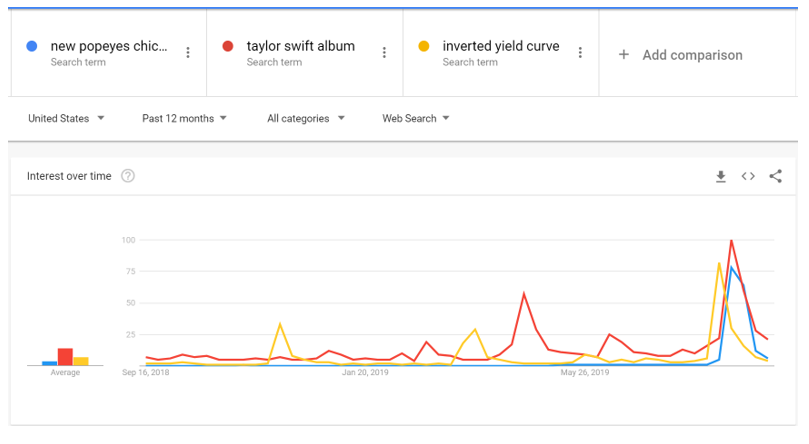 One might surmise that it is probably rare to find one of our favorite but more arcane and wonky macroeconomic indicators makes it into the zeitgeist of American internet pop culture, but it’s happening today!

What exactly is an inverted yield curve?

First, it is important to understand what a normal yield curve is and looks like. The U.S. government issues a lot of fixed income Treasury securities (bills, notes, and bonds) that mature over time. The yield curve is a graph in which the yield of those Treasury bills, notes and bonds are plotted against the length of time they have to reach maturity. Normally, Treasury bonds that have a longer maturity (e.g. 10 years) will have a higher yield (the total return an investor would receive if he or she holds the security to maturity) than Treasury bills with a shorter maturity (e.g. 3 months). This makes intuitive sense since investors normally demand a higher return for loaning their money to the government for a longer amount of time.

In the graph below, the orange dotted line represents a "normal" U.S. Treasury yield curve, as seen in March of 2009 while America found herself in the teeth of the recession. Notice short-term yields are much lower than longer-term yields (yields are on the y-axis and maturities are on the x-axis).

Why does the yield curve invert?

While the short-term end of the yield curve is mainly driven by Fed monetary policy that reflects the current economic outlook and its control of very short-term interest rates, the long-term end of the yield curve is driven by bond investors’ long-term views of the market. If bond investors are bullish on the economy and believe interest rates will go up, they are more willing to hold short-term bonds and hope to get higher yields in the future. On the flip side, if bond buyers believe the economy is heading downward and interest rates are likely drifting lower, they’d prefer to hold the longer-term bonds in order to lock in the current higher yields. In that case, the higher demand for longer-term bonds will drive up their prices and lower the yields. Long-term bond yields are usually higher during economic expansions because bond investors need more compensation to be locked in for longer periods of time; but when the sentiment gets bearish and worries about a recession manifest, the long-term yields can fall below the short-term yields as they are today.

Without getting overly granular, an inverted yield curve is often seen as a negative sign foreshadowing the likelihood of a coming recession. Based on our read of financial history, it can be observed that an economic recession generally rears its ugly head about twelve months after a yield curve inversion.

As mentioned recently, the economy continues to grow, but some of our leading economic indicators - like the yield curve - are flashing caution. While we can never predict the future with any specificity, we need to be mindful of signs that signal that this business cycle expansion could end and the economy enters a recession. To wit, our portfolio positioning now favors a more conservative asset allocation approach to global equities and fixed income.

As to the Google search trends, our stomachs favor trying one of those new Popeyes chicken sandwiches!

For more information on this topic, contact Russell Moenich.

As Chief Investment Officer, I am responsible for the firm’s adherence to its investment philosophy and the execution of its investment process by leading and articulating Sequoia’s...