It is amazing what Buddy Guy can do with the standard 1-4-5 chords of blues music.

Regarded as one of the greatest blues guitarists of all time, his ability to bend and push those chords by stretching the guitar strings across the frets to get the maximum raw emotional power is second to none in our opinion. Clapton described him as the "best guitar player alive" in a Rolling Stone magazine interview back in 2015. Even a young Hendrix - whose sound was inspired by Guy's distortion heavy riffs - tracked him down at a blues workshop back in the 60's and recorded him with a reel-to-reel tape machine in order to figure out what he was doing.

In recent interviews on the Mark Maron WTF podcast and in a New Yorker article, Guy expressed some worry about being the last of the great electric blues guitar pioneers, a lineage that includes Albert King, B.B. King, Muddy Waters, John Lee Hooker, T-Bone Walker, Albert Collins, Freddie King, Otis Rush and so many more. David Remnick, the author of the New Yorker piece, did a good job capturing Guy's worry:

Buddy Guy is eighty-two and a master of the blues. What weighs on him is the idea that he may be the last. Several years ago, after the funeral of B. B. King, he was overcome not only with grief for a friend but also with a suffocating sense of responsibility...With King gone, Guy says, he suddenly “felt all alone in this world.” The way Guy sees it, he is like one of those aging souls who find themselves the last fluent speaker of an obscure regional language. In conversation, he has a habit of recalling the names of all the blues players who have died in recent years: Otis Rush, Koko Taylor, Etta James, James Cotton, Bobby Bland, and many others. “All of ’em gone…” As far as his greater burden is concerned, he radiates no certainty that the blues will outlast him as anything other than a source of curatorial interest. Will the blues go the way of Dixieland or epic poetry, achievements firmly sealed in the past? “How can you ever know?” he says.

As blues music fans, we worry about this as well…but not that much.

Yes, Guy is the last true electric blues pioneer, but his and the other pioneers' influence live on through cats like Robert Cray, Bonnie Raitt, Dereck Trucks & Susan Tedeschi, and Joe Bonamassa to name a few. We believe great blues music will continue to be with us for a long, long time!

One group of investors that has been singing the blues in a bad way for a long, long time are value investors.

Value stocks - those stocks that trade at a low price relative to their fundamentals such as earnings or sales - have underperformed growth stocks (the opposite of value stocks) for pretty much the whole period since the Great Recession. The chart below is a simple ratio of the index values between the Russell 1000 Value Index (a collection of large-cap value stocks) and the Russell 1000 Growth Index (large-cap growth stocks) between 01/01/2009 and 09/20/2019:

However, the days of value stocks underperforming growth stocks may be coming to end for two reasons. First, the valuation of value stocks relative to the rest of the equity market is at an extreme…that is, value stocks are at some of the most "valuest" prices ever as shown in the chart below: 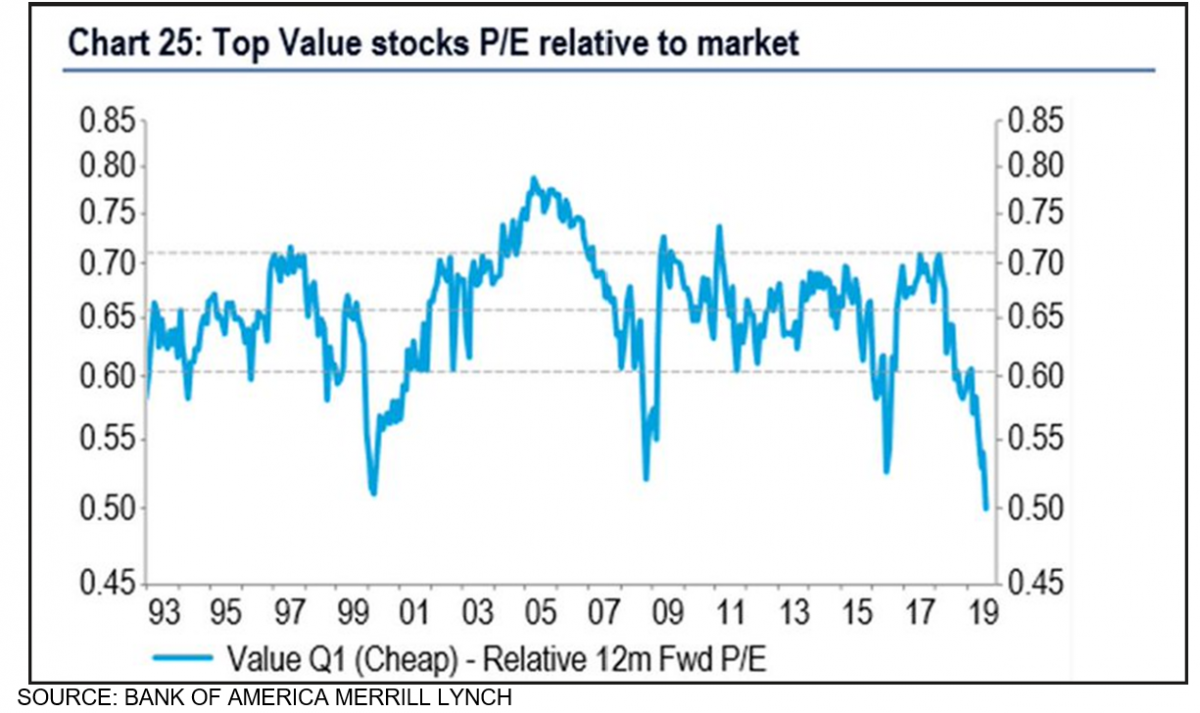 Second, value stocks have a tendency to outperform growth stocks (shown as momentum in the chart below) when the yield curve (a concept we talked about here) starts to steepen: 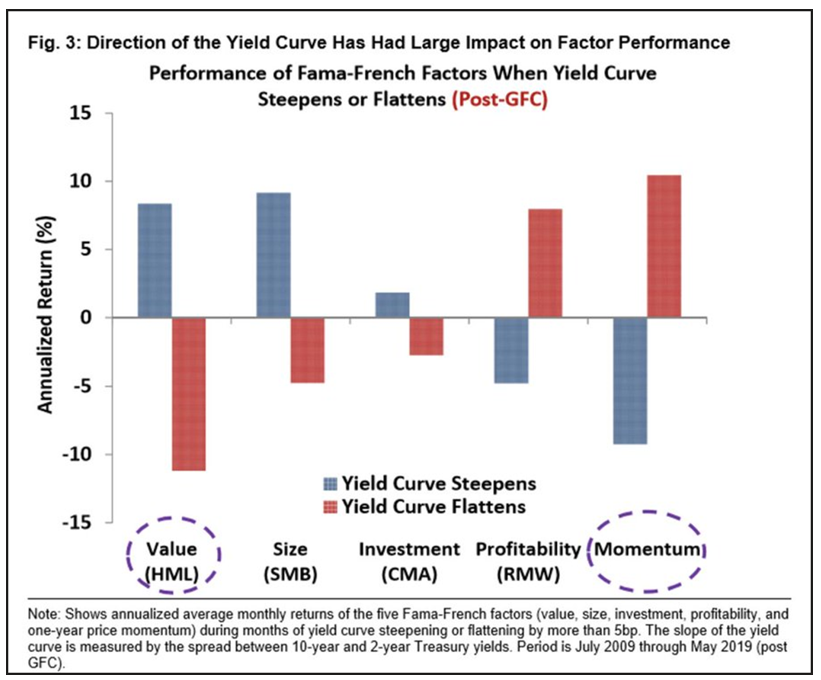 Today, the yield curve is very flat and inverted in some places, but the next move for the curve is for it to steepen given the Federal Reserve Bank is lowering short-term interest rates associated with the front-end of the curve. This may boost value stocks given the style's historical tendency to outperform.

Reversion to the mean is one of the most powerful forces in investing, and, in this case, value stocks should eventually start to outperform growth stocks. At some point in the future, growth investors will start to sing the blues!

Contact Russell Moenich for more information on this topic.