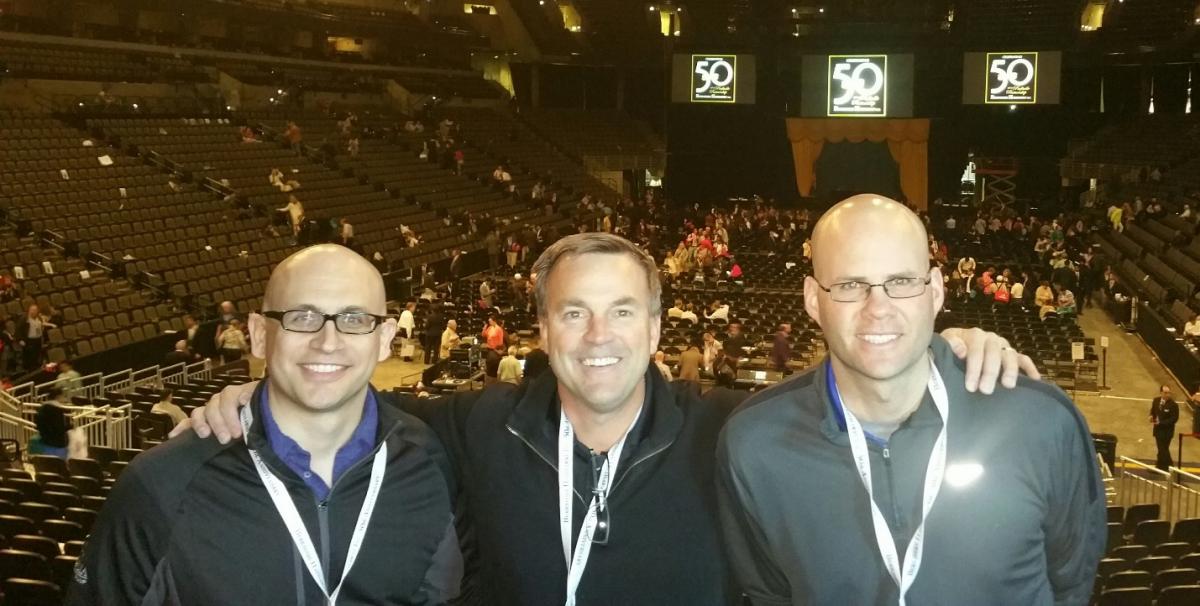 Imagine walking into a giant room filled with Dairy Queen ice cream Blizzards and Dilly Bars as far as the eye can see, a seemingly endless amount of chocolate candy and other sweets from See's Candy, hundreds of racks of Fruit of the Loom outer- and undergarments, and giant Heinz ketchup and mustard bottles walking around taking photos with young children and adults.

A strange dream you say?

More like a dream come true for the 40,000-strong folks that made the pilgrimage to the Berkshire Hathaway annual shareholder meeting in Omaha, Nebraska. The meeting is held annually over the first weekend in May, and this year marked the 50th anniversary.

For the uninitiated, Berkshire Hathaway is the massive, publicly traded conglomerate holding company (2014 revenue was almost $200 billion) consisting of dozens of wholly owned business subsidiaries like those mentioned above as well as railroads (Burlington Northern & Sante Fe Railway), insurance (GEICO), private jets (NetJets) and food brands (Heinz & Mars Candy) to name a few. Berkshire also owns significant stock holdings in The Coca-Cola Company, Wells Fargo, IBM and American Express. The company is run by CEO Warren Buffett and Vice Chairman Charlie Munger. Buffett, at 83 years old, happens to be the third-wealthiest man in the world, and Munger is probably one of the clearest-thinking human beings on the planet despite recently turning 91 years old.

The Berkshire Hathaway annual meeting is really something special.

Business Insider's Myles Udland, a first time attendee this year, characterizes the meeting perfectly in his first person account entitled "A Carnival and a Church: I Spent 3 Days in Omaha Chasing Warren Buffett but Found Something Else:"

"The event is a celebration and a coronation, something Buffett surely never imagined would exist when his Buffett Partners investment fund took control of Berkshire Hathaway, a failing textile manufacturer in Massachusetts, 50 years ago. It's something that I'd wager Buffett himself finds strange.

And so not only is total attendance at Berkshire's meeting multiples of what you'd find at any other company's, but the tone is not one of aggression or displeasure but fawning and deference. And all of this is to say nothing about the shopping event that happens adjacent to the meeting itself. It is a celebration and a party and a spiritual event."

The meeting's real attraction though is the Q&A session with the two elder gentlemen that run Berkshire. Upon taking the stage, in the CenturyLink Center arena, they immediately set the tone for the day: "I'm Warren, he's Charlie. He can hear and I can see. We work well together!"

And over the course of the next seven hours, those in attendance are treated to Buffett and Munger's knowledge cultivated during their 37 year partnership covering an array of topics, not just Berkshire’s business operations, but also invaluable insight about preserving your reputation, making friends and networking, and corporate culture and leadership.

Among those in attendance were, in fact, a three-person delegation from Sequoia (the motley crew pictured above) consisting of our company's president, Tom Haught, client advisor (and veteran annual meeting attendee) Jeff Rovnak, and your humble correspondent. One of the more interesting facets of the meeting was the diverse lessons learned and individual takeaways from each of our three perspectives. This is truly a testament to Buffett and Munger’s simple yet profound wisdom on how to run a successful business and a successful life.

As Sequoia continues to grow rapidly, Tom reflected on comments Buffett made about the company's special culture in his answer to a question from an investor who asked about life after Buffett and Munger are gone. Given the age of both men, this has become a popular worry for many investors. Buffett answer was insightful:

“Berkshire’s culture runs as deep as any large company. It's a vital part of Berkshire to have a clearly defined and a deeply embedded culture which will continue and become even stronger. It’s not the force of personality. It’s institutionalized. It will continue for decades and decades and decades to come. Culture is everything at Berkshire. It has to come from the top. People see how those above them behave and they move in that direction.”

Buffet and Munger also talked a lot about reputation, which is "something that is key and that you build it over time...That's something Berkshire had to acquire...Hardly anything is more important than behaving well as you go through life." These comments resonated with Tom as well. Sequoia has spent a lot of time and effort building a positive reputation of being a trusted advisor for its clients and a charitable organization in the community it serves.

As a client advisor, Jeff needs to be a voice of reason and rationality during difficult market periods, when it’s often easy to have irrational responses … think 2008-2009. He found a kindred soul of rationality in Munger:

"Early on I got the idea that, partly from my family, that really your main duty is to become as rational as you can possibly be...Since I was good at that and no good at anything else, I stuck with what worked well for me...Rationality is a moral duty. Berkshire is sort of a temple of rationality.”

I found plenty of investment insight there as well, including comments that support our firm’s current preference for foreign equities over domestic. Berkshire recently bought a private company in Germany and commented that “prices may be a little more attractive there than in the United States.”

We also believe emerging markets, led by China, will be a great place for investment returns over the long-term. Buffett and Munger were positive on China's future:

"China is going to do just fine over time...It's totally miraculous what the country has done so far...I would have not believed a country of that size could move so far, so fast...They found a way to unlock their potential...China and the U.S. are going to be the two super powers going forward and both countries are better off if they’re both doing well."

All three of us — and we are sure all 40,000 in attendance — found their comments on making friends the epitome of what makes this meeting so amazing. A seventh-grade student who traveled to Omaha from Florida asks the duo how to a make lots of friends, and how you get people to like you and work with you?

Munger chimed in first: "The only way I could get people to like me was to get very rich and be very generous!"

Munger, in his infinite wisdom, added that it works in marriage too!

The opinions expressed do not necessarily reflect those of author and are subject to change without notice.