On page 284 of The Life of Reason, one of the greatest works of Western moral philosophy, intellectual giant George Santayana (probably unknowingly) offered some of the best investing advice ever written:

“Those who cannot remember the past are condemned to repeat it.”

Understanding how financial and investment markets behaved and reacted to past circumstances is extremely important to an investor’s asset allocation strategy in every part of the business cycle. While no two investment market experiences are exactly the same, frequently the contextual and economic environments in which investment scenarios play out are similar. As an example, the current economic and investment facts and circumstances today could be reasonably compared to the early 1990’s market.

Throughout the 1980’s the U.S. economy enjoyed the “Regan Boom,” a period of time characterized by strong economic growth and relatively low inflation as compared to the decade prior when inflation was between 10-15%. However by 1990, the economy was in a recession. It took the economy a few years to fully climb into a higher gear, similar to the last few years since 2009. In March of 1994, the Fed initiated a campaign to increase interest rates in order to cool the economy down, and the campaign resulted in big declines in equity markets and strong headwinds for fixed income investors for the ensuing 12 months. 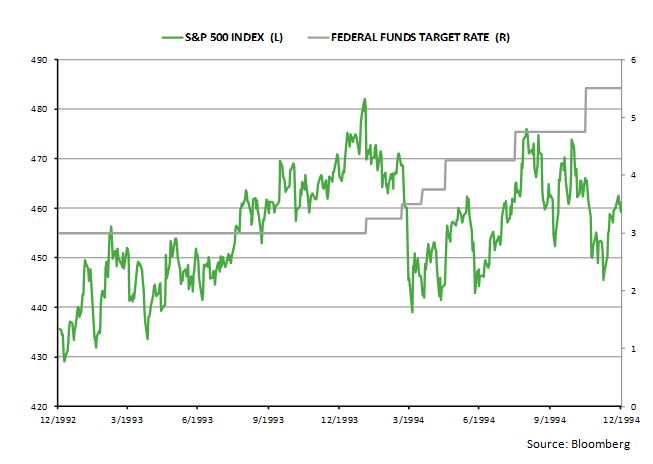 Today investors are now contemplating the future normalization of interest rates in the U.S. as the latest incoming economic data suggest acceleration in growth maybe afoot, and similar to 1994, better economic growth will bring higher interest rates. The last time the Federal Reserve Bank raised interest rates was June 29, 2006...a distant
memory in most investors’ minds after eight years of extremely accommodative monetary policy. According to comments Fed Chairwoman Janet Yellen made in March, the next time the Fed raises short term interest rates might be in mid-2015, depending on the levels of unemployment and inflation in conjunction with economic growth.

Assuming the 1994 comparison is valid, understanding the investment context leading up to, during, and after the impact of the Fed’s change in monetary policy in 1994 can be very helpful to investors today. In the run up to the first interest rate hike in 1994, value stocks (those that trade at a low price relative to their fundamental attributes such as earnings, revenue, etc.) outperformed high growth/richly valued stocks. In the ensuing general market selloff, value stocks also outperformed growth stocks. Investors, using the same playbook today, have been selling high growth, richly valued technology and biotechnology stocks, which have underperformed since Yellen’s comments in March, in anticipation of an eventual interest rate hike by the Fed.

The general relationship between growth vs. value stocks and the business cycle is explained in the seminal 2007 position paper entitled Forecasting Performance Cycles of Value and Growth Stocks in Global Equity Markets written by David Kovacs, the highly-respected, super Chief Investment Officer from Turner Investment Partners. His work suggests the following which seems spot on right now:

"Following periods when short-term rates ease, lending activity and subsequently business development typically accelerates. During these periods value stocks, led by financial and industrial companies, begin to outperform. As the global economy begins to expand, demand for basic materials, such as metals, and energy related commodities, such as oil and natural gas, rises. That leads to an increase in the price of these commodities which in turn has historically led to the outperformance of the stocks of commodity producers and processors. As in the case of an economic slowdown, the monetary response to economic expansion is also typically delayed until sustained signs of acceleration in inflation are apparent. In response, central banks begin to hike short-term interest rates to the point where the interest rate yield curve is flat or inverted, i.e. short-term rates are either equal to or higher than long-term rates. Lending activity to businesses then typically slows significantly, profits of financial institutions decline, and financial stock prices begin to lag the market averages. Economic activity moderates, and once again those stocks that can grow their earnings at the fastest pace, namely, growth stocks, typically resume a period of multi-year outperformance."

The “1994” episode did have a happy ending as equity losses were more than fully recovered in the following years as investors ultimately realized higher interest rates came with more than commensurate economic growth.

Past performance is not indicative of feature results. The information contained in this article is for informational purposes only and is not meant as a solicitation to buy or invest in a specific security. Please contact a financial professional to discuss your individual financial situation.