No Fed pivot! That was Federal Reserve Chairman Jerome Powell’s loud and clear message on Friday during his speech at the Fed’s annual Jackson Hole Economic Symposium. Markets have been conditioned for many years to expect the Fed to pivot from hiking interest rates to being super supportive at the least hint of economic weakness and market volatility. Since June, some inflation data has started to cool mildly, and many investors again started to think the Fed might pivot as in the past. Mr. Powell unambiguously explained there is no pivot in sight given persistently high inflation. That’s what is different this cycle versus the prior cycle in which the Fed could pivot to easy monetary policy on any weakness: the economy had little inflation post the 2008/09 financial crisis. But with inflation still running at the highest levels since the early 1980’s (though it has cooled a bit from earlier this year) the Fed cannot pivot to ease policy now as it has done in the past. The stock market acknowledged Powell’s address by sending prices down violently: the S&P 500 fell 3.4% Friday after the speech and was down 4.02% for week2. Investment-grade bond prices were not immune either, as the Bloomberg Aggregate Bond Index was down 0.36% last week as interest rates continue to be highly volatile with an aggressive Fed and changing economic conditions2.

We take Mr. Powell at his word that restrictive monetary policy is set to continue, but we do think the pace of rate hikes is likely to slow in the months ahead in the face of progressively weaker economic and inflation data. For instance, the Core Personal Consumption Expenditures Price Index (PCE) data released last week, the Fed’s preferred inflation gauge, showed inflation was up just 0.1% in July and slowed to 4.60% year over year in July1. Also, the University of Michigan’s Five-Year Inflation Expectations survey showed households expecting inflation to cool as well, with the rate slowing to 2.9%1.  As we discussed last week, housing has cooled significantly as has manufacturing data1. Commodity prices (other than natural gas) are also down significantly over the last few months1. We see this is as evidence that the Fed’s rate hikes so far (2.25% since March of this year1) are starting to gain traction in slowing both the economy and inflation. But a PCE reading of 4.60% is still a long way from the Fed’s 2% inflation target, so Mr. Powell and the Fed will continue raising interest rates to slow the economy and labor markets until they see a material move toward the 2% target. They don’t want a repeat of 1970’s style inflation. We think investors should expect continued financial market volatility as a result. Our team is maintaining patience, balance and discipline in our management of strategies in this uncertain environment. 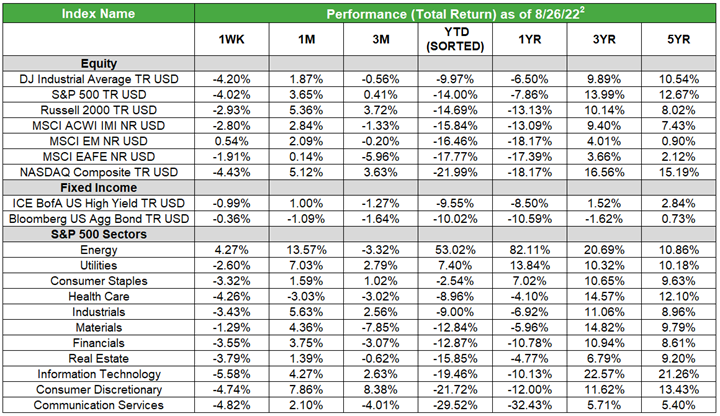 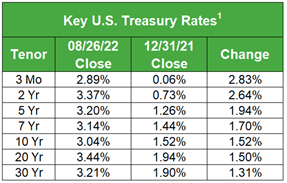