As of Friday’s close, the S&P 500 has rallied 13.24% since June 162.  Investors have rightfully cheered a stronger-than-expected earnings season, potentially peak inflation data and resilient economic data.  The recent rally helps offset the tough losses sustained in the first half and leaves the S&P 500 now down 12.24% for the year2.  Bonds have continued to struggle with the Bloomberg Aggregate Bond Index down 9.11% for the year as interest rates continue to be highly volatile2.

While we welcome the recent rally in equity markets, we expect more volatility in the short and medium terms.  Last week, the Bureau of Labor Statistics released its monthly employment situation report, which showed strong, broad-based growth of 528,000 new jobs in July, more than double the consensus estimate of 250,0001.  The unemployment rate dipped to a pre-pandemic level of 3.5% and one of the lowest levels since WWII1.  Average hourly earnings likewise increased at a faster- than-expected clip of 5.2% year over year1.  Suffice it to say, U.S. labor market is tight, which puts additional pressure on the Federal Reserve to continue with its aggressive monetary policy.

How hawkish the Fed will be, the magnitude of economic slowdown, and how companies are dealing with it will be gradually revealed in the weeks ahead. We think the tug of war between the Fed and the economy is far from over and that investors should not let their guard down after the recent equity rally.  For evidence, look no further than the Treasury yield curve, which has been inverted (2-year yield is higher than the 10-year yield) since July 61.  The 3-month yield minus the 10-year is approaching zero1.  Historically, when the 3-month and 2-year yields have stayed higher than the 10-year for a few months, recessions have followed around 12-18 months later1.  We still think it’s possible for the U.S. to escape the current high inflation situation without the Fed having to drive the economy into a severe recession (like the early ‘80s), but the bond market seems skeptical, especially after last week’s employment data.  We continue to employ patience, balance, and discipline in the management of our strategies. 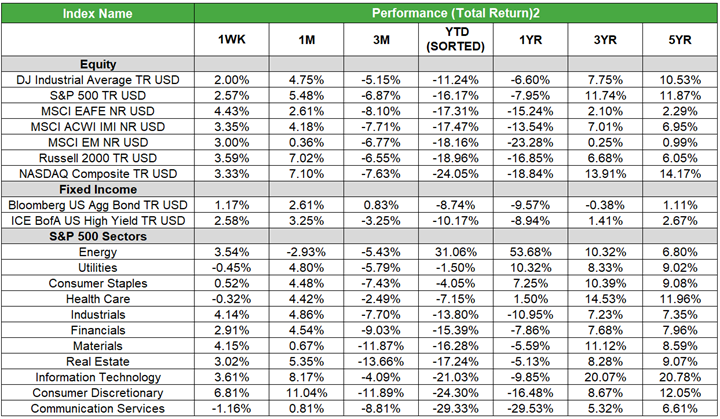 It’s Been a Nice Rally, but Don’t Let Your Guard Down | Sequoia Financial Group