The S&P 500 Index fell 4.73% last week after hotter-than-expected inflation data surprised investors on Tuesday1. The Index dropped 4.3% on Tuesday alone, its worst day since June 20221. Investment-grade bonds once again offered no place to hide as interest rates soared. The yield on the 1-Year Treasury note jumped from 3.67% to over 4% last week, the first time it has been north of 4% since 20011. Also note the substantial changes in interest rates so far this year in the chart below. The Bloomberg Aggregate Bond Index declined 0.93% for the week given the broad-based spike in interest rates1.

The Consumer Price Index (CPI) shocked markets last week with strong monthly gains in August, indicating that the Federal Reserve still has inflation problems. The CPI was up 0.1% for the month compared to consensus expectations of a 0.1% decline1. Gasoline prices were down, but that was about it. Electricity and natural gas prices rose, and food prices increased 0.8% in August alone, four times the average monthly gain since 19901. Core CPI, which strips out food and energy costs, advanced 0.6% in August - double expectations as well as the July readings1. Even with the Federal Reserve raising its benchmark rate by 225 percentage points so far this year, inflation is still running at rates last seen in the early 1980’s1. On a year-over-year basis, the CPI increased 8.3% compared to August 2021 and the Core jumped 6.3%1. Food prices leaped 11.4% year over year, the most since May 19791.

Aside from the CPI data, concerns about a slowing global economy in the face of an aggressive, inflation-fighting Fed added to market jitters. FedEx withdrew its earnings guidance in light of what the company sees as an extremely uncertain global economic environment1. This made investors question how many other companies might do the same during the upcoming earnings season, which starts in early October. Additionally, the NFIB Small Business Optimism Index is down 8.3% from a year ago, signaling that small firms are encountering tough conditions as the economy weakens1. Finally, the CEO Economic Outlook Index and the Philly Fed General Business Activity Index data released last week showed weakening CEO confidence and manufacturing activity in the mid-Atlantic region1.

Investors have become accustomed to a Federal Reserve that has pivoted to highly supportive policy when the economy and markets have gotten rocky over the last 15 years. But stubbornly high inflation today will not allow such a pivot now.  As a result, investors should expect continued market volatility. We will learn more about how aggressively the Fed intends to fight inflation at its upcoming Federal Open Market Committee meeting on Tuesday and Wednesday. We expect the Fed Funds Rate to be hiked by another 75bps, the third such hike in a row, and expect the FOMC to signal several more hikes ahead. We urge investors to remain patient, balanced and disciplined in this uncertain environment as the Fed grapples with its inflation problem - and ours. 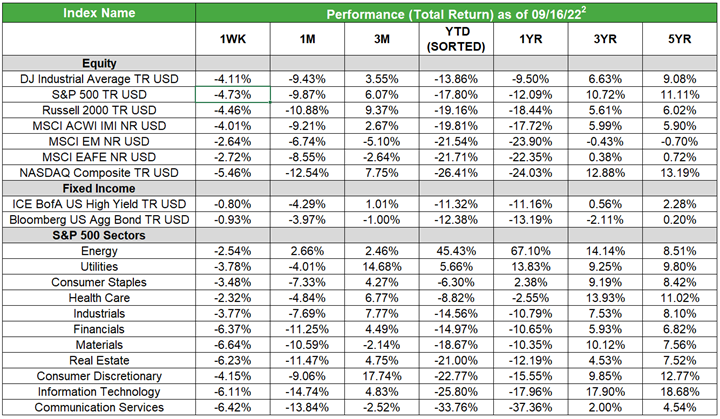 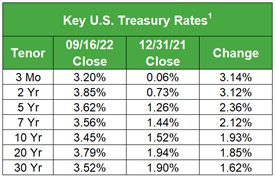