Equity markets took a breather last week after a strong run since their June 16 low as investors absorbed weakening housing and leading economic data, as well as shockingly high European inflation data. The S&P 500 was down 1.16%, and is now down 10.39% for the year2. Investment-grade bond prices edged up again last week as the Bloomberg Aggregate Bond Index rose 0.09%, but is still down 9.14% for the year as interest rates continue to be highly volatile2.

It was a fairly light data week, with both negative and positive results from the U.S.. Housing starts fell 9.6% and existing home sales were down 5.9% in July as housing inflation and higher interest rates crimp demand1. The Conference Board’s Leading Economic Index slid 0.4% in July, its fifth straight month of decline owing to consumer pessimism and weakening new orders manufacturing data1. On the plus side, retail sales ex-autos held up well, rising a better-than-expected 0.4% in July1. Industrial production also edged up 0.6% in July, its first increase in three months1. But some truly shocking inflation data came out of Europe. The U.K. Consumer Price Index came in at 10.1% year over year in July, a new 40-year high1. The Producer Price Index in Germany surged 37.2% year over year and 5.3% in the month of July alone, the highest readings since data records began in 19491. Our global allocation strategies have maintained an overweight to U.S. equities for the last few years as the situation in Europe has not looked solid. We worry the U.S. will not be immune from Eurozone weakness and inflation, a situation we are closely monitoring.

We think the tug of war between the Fed and the economy is far from over and investors should not let their guard down after the recent equity rally. The bond market remains skeptical of growth prospects, as evidenced by the inversion of the Treasury rate yield curve (the 2-year yield higher than the 10-year yield) since July 61. The 3-month yield minus the 10-year is also getting closer to zero1. Historically, when the 3-month and 2-year yields have stayed above the 10-year for a few months, recessions have followed with a 12-18 month lag1. We still think it’s possible for the U.S. to escape the current high-inflation situation without the Fed driving the economy into a severe recession (as happened in the early ‘80s), but we remain focused on the bond market’s apparent concerns. Our team is maintaining patience, balance and discipline in the management of strategies in this uncertain environment. 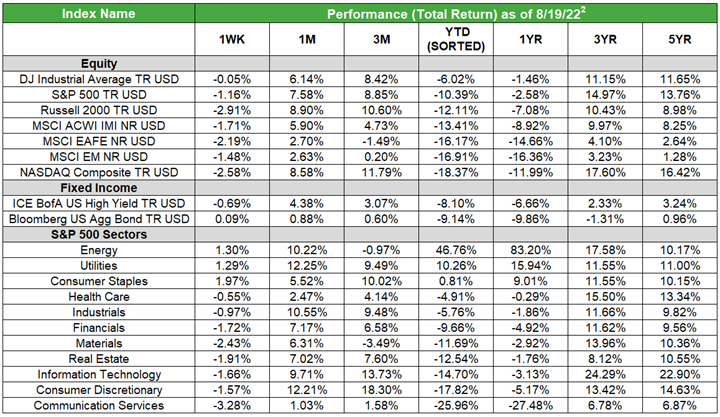 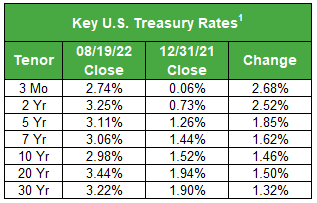