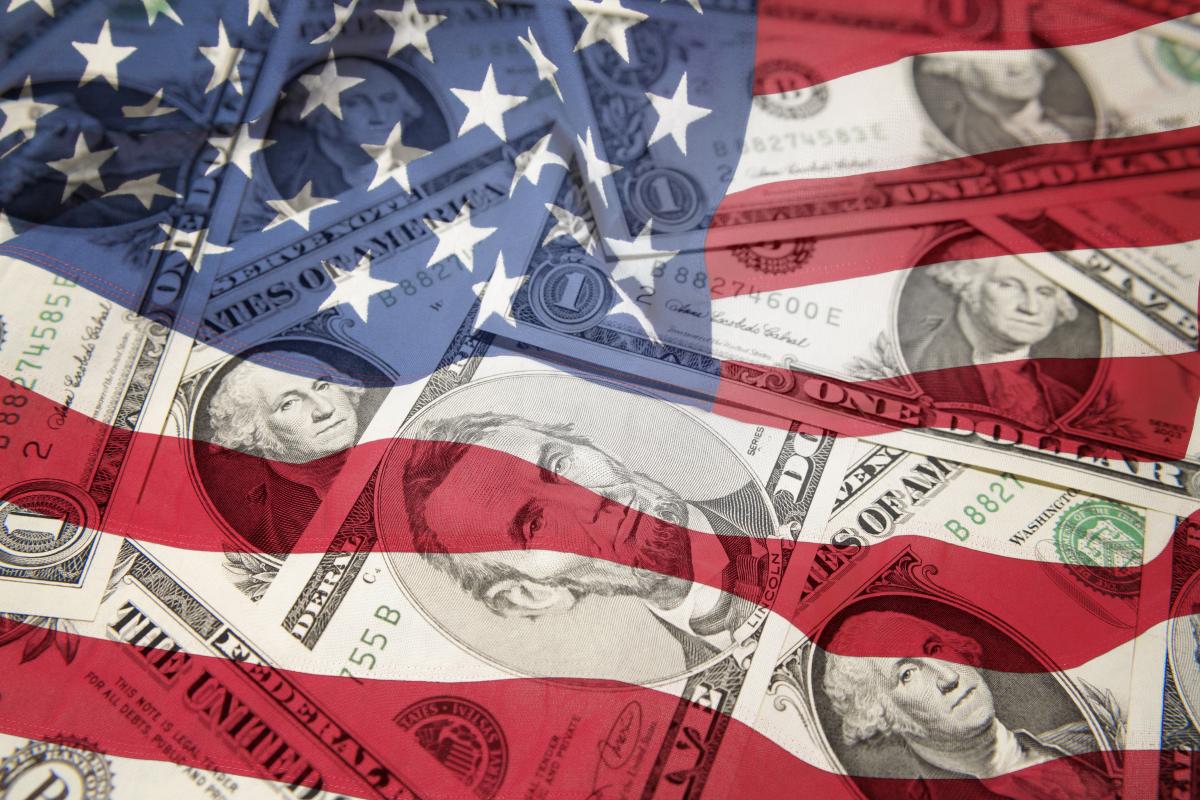 In his collection In Praise of Idleness & Other Essays, the British philosopher and mathematician Bertrand Russell answers an interesting question:

What is work? Work is of two kinds: first, altering the position of matter at or near the earth's surface relatively to other such matter; second, telling other people to do so. The first kind is unpleasant and ill paid; the second is pleasant and highly paid. The second kind is capable of indefinite extension: there are not only those who give orders, but those who give advice as to what orders should be given. Usually two opposite kinds of advice are given simultaneously by two organized bodies of men; this is called politics. The skill required for this kind of work is not knowledge of the subjects as to which advice is given, but knowledge of the art of persuasive speaking and writing, i.e. of advertising.

His characterization of politics is spot on and on full display during the current presidential election circus. We are unsure if either of the leading candidates really has knowledge of the subjects they are yelling about, e.g., national security, taxes, immigration, global trade, etc., but their persuasive speaking skills are exemplary. We — maybe like you — have been persuaded that paying attention to the absurdity makes for good television, but it is a waste of time to dig deeper.

Except we have a responsibility to anticipate what the future may look like, at least from an economic and investment perspective.

Politics can muck it all up.

JP Morgan has parsed the absurdity and gets to the important issues. Hillary Clinton, the leading Democratic nominee, has a small lead over Donald Trump, the Republican lead to date. But it is too close to call at this point based on four of the leading national polls (Gallup, Rasmussen, Real Clear Politics & Quinnipiac): 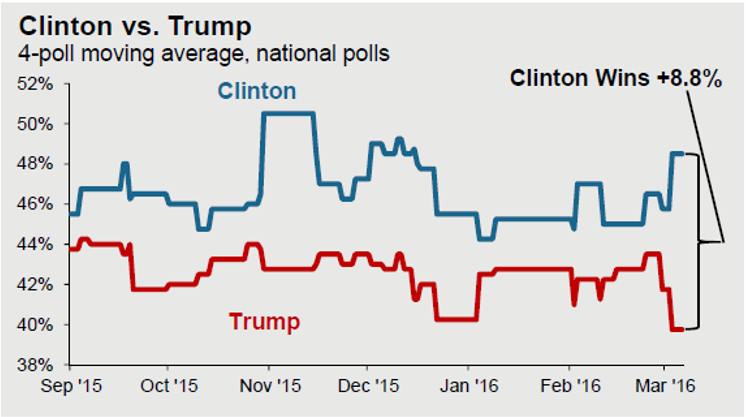 What is clear, like it or not, is that the U.S. economy (based on Gross Domestic Product: GDP) and the stock market have done well under Democratic presidents: 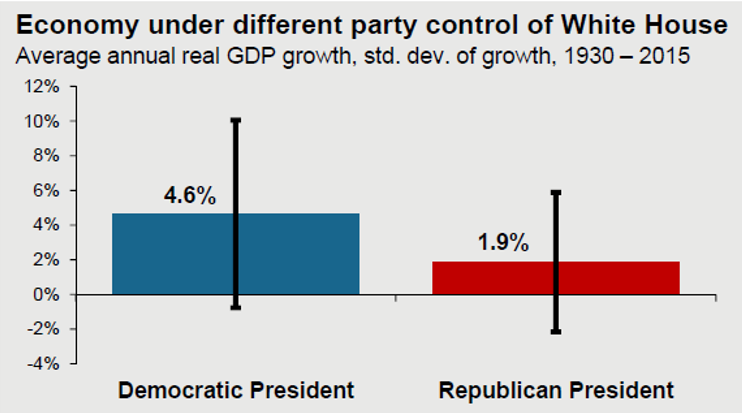 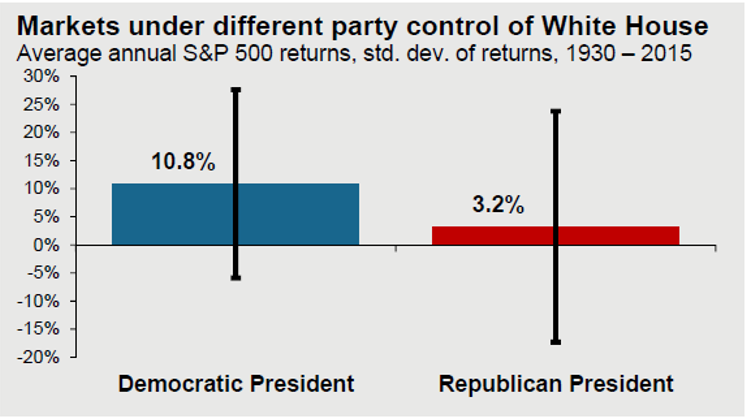 While there is a lot of discussion about the presidential election, the composition of Congress adds an interesting dynamic. Currently the Republicans have majorities in both the Senate and the House, but the majority in the former is only 5% and may be at risk of turnover: 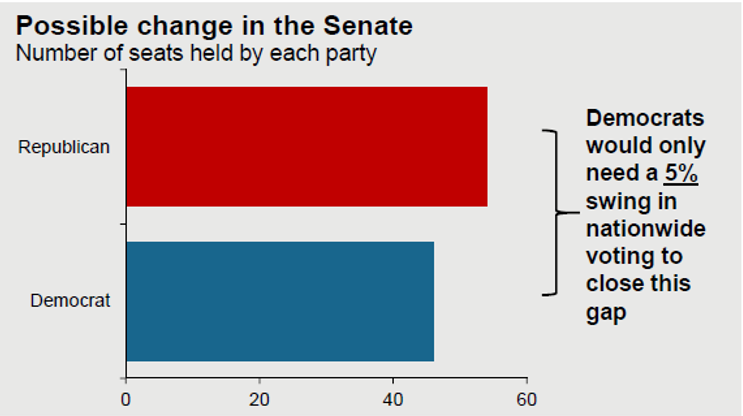 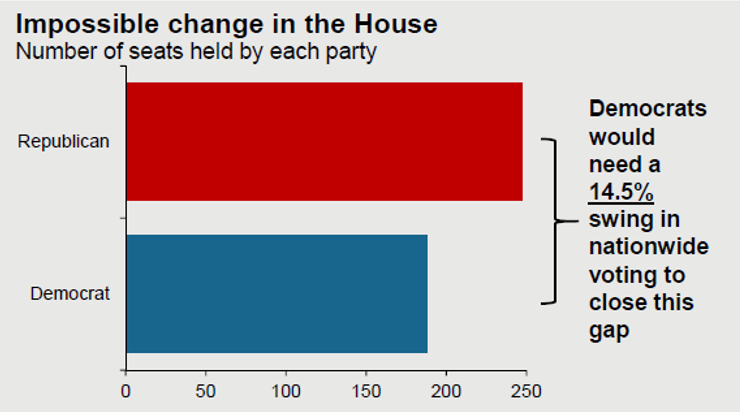 JP Morgan’s survey of U.S. stock market returns based on the total composition in Washington D.C.  (President/Senate/House) is shown below: 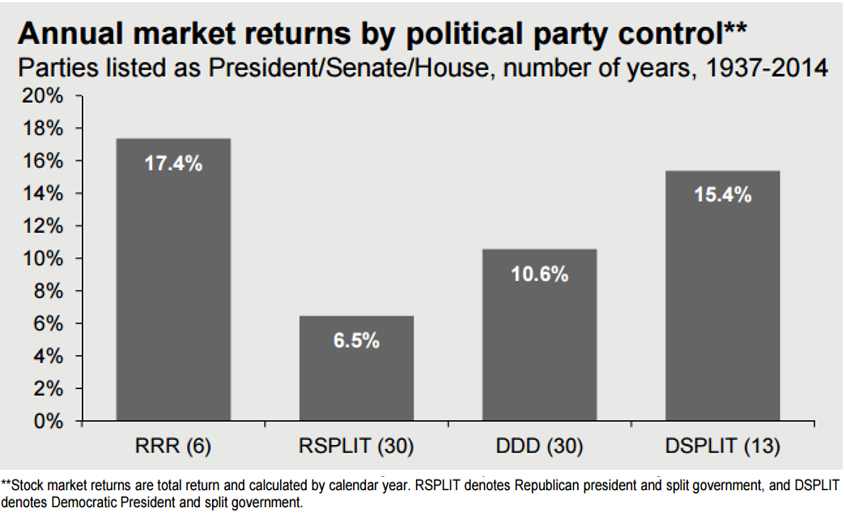 With the political muck most likely resulting in a divided government based on current polls, the investment future may be promising!