After strong moves in 2013, investors were overly bullish coming into January and the equity markets were “priced for perfection” in terms of valuation. Anything that was not wildly positive was bound to cause investor anxiety. Sure enough, the market – now down around 5% so far this year - found (at least) two things to worry about: (1) financial turbulence in some emerging markets (e.g. Turkey, South Africa, and Argentina); and (2) solid but weaker-than-expected domestic economic data (e.g. jobs and other forward looking/leading economic indicators). The former brings back memories of the 1997-1998 emerging market crises, while the latter has been explained away by the optimists as a function of the severe winter weather in December and January, and the pessimists believe this is a start of a broader/longer-term economic slowdown in the economy.

No one can accurately predict if either emerging market turbulence or a slowdown in economic activity will turn into something much worse. However, both of these worries can ultimately catalyze fear and an associated negative feedback loop into capital markets in the short-term. One thing to pay particularly close attention to is U.S. credit markets and financial conditions for hints of forthcoming problems. A good high frequency proxy for both is the weekly Federal Reserve Bank of Chicago’s National Financial Conditions Index, which is shown below: 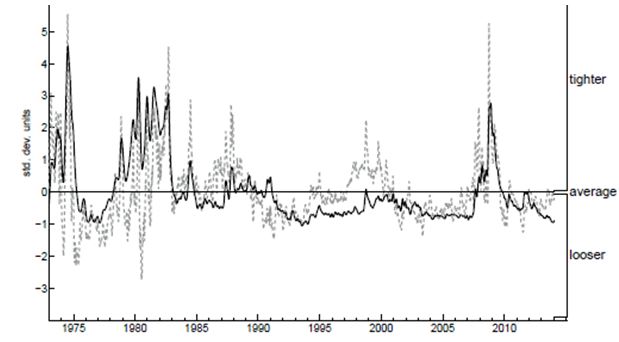