While we are huge fans of George Washington (one of the true GOATs – Greatest of All Time), we were even bigger fans of him after reading David Fischer's Pulitzer Prize winning book Washington's Crossing. Fischer gives the play-by-play of Washington's heroic crossing of the Delaware River on a brutally cold and snowy Christmas night in 1776, surprising the Hessian enemy forces bunked down in Trenton, New Jersey. If you don't know the detailed story, it is incredible and a must-read. But most everyone knows this event, and the subsequent victory was the turning point in the American Revolutionary War.

So it may not come as a surprise to you that fly fishing (and actually catching fish) on the Delaware River — the very same river Washington crossed — is also kind of a big deal and a big bucket list item that we recently checked off (though about 200 miles upriver from Washington's legendary crossing).* Suffice it to say, the weather was better than what Washington faced, and the fly fishing on this beautiful river (shown above) was calming almost to the point of being meditative.

There was only one very brief moment on the trip when the beauty and calm were interrupted. At a "busier" stretch on the river where the east and west branches meet, there was a series of political election campaign signs planted on private property facing the river. The signs momentarily took away the grandeur of the colorful fall season (but not the fun of fishing!) and were a stark reminder of the campaign storms associated with the political midterm elections season.

We, of course, do not have an ax to grind in any of the political outcomes. We do, however, want to understand the ramifications of the House and Senate election outcomes on capital markets. The setup of the control dynamic is shown below: 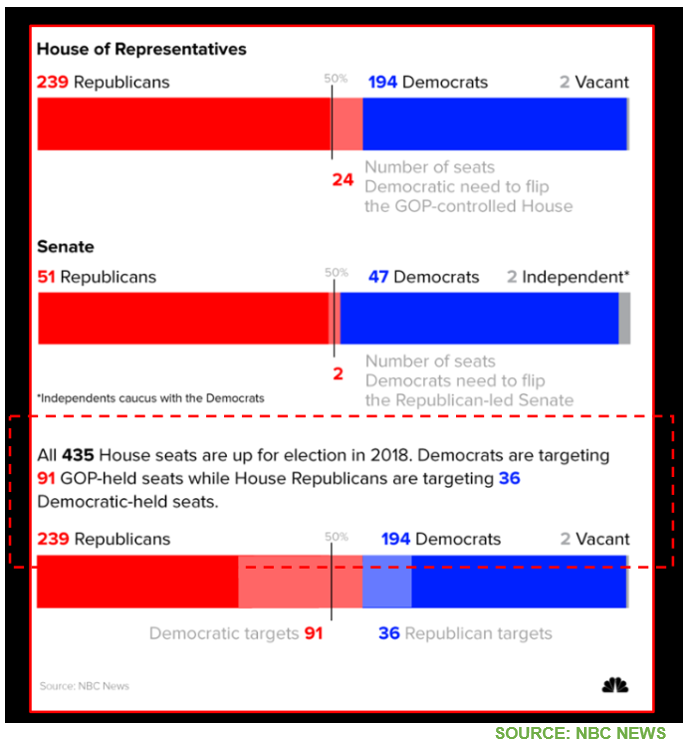 It seems, today, market participants collectively are expecting the Republicans to lose control of the House of Representatives and keep control of the Senate based on an aggregation of polls and betting odds makers (e.g. FiveThirtyEight's analysis shown below): 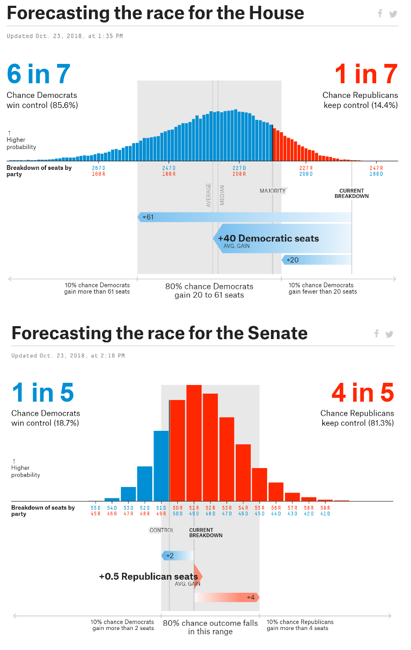 Any other outcome would be a bit of a surprise to the market.

Either way, we believe the ultimate market impact will be muted. Should Republicans maintain control of the House and Senate, investors could reasonably expect much of the same out of Washington, such as continued efforts aimed at deregulation and little effort to restrain White House initiatives like the trade tariff tantrums. The most extreme switch, in which the Democrats wrestle control of both chambers, would likely leave them short of a veto-proof majority, meaning the Republicans could block Democratic initiatives in areas like immigration and health care.

As repeat readers of this blog know, we don't like to make (nor are we any good at it!) predictions on the future direction of capital markets. However, it is hard to see any obvious political configuration that pushes U.S. equities significantly in one direction or the other. Developed and emerging market equities outside of the U.S. could get a boost from a political outcome that offers a softening response on trade tariffs. We believe fixed income pricing could be vulnerable to either a second tax bill or an infrastructure bill, but both would be relatively small compared to the $1 trillion stimulus from the 2017 legislation. Tax reduction most likely will continue if the Republicans retain control, and this may be modestly bearish for U.S. Treasury bonds.

Morgan Stanley market strategists Scott Helfstein and Matthew Brookman did the research on stock market returns after midterm elections. They found historically that the stock market has done best when control of Congress is split — an average 12% return for midterm congressional sessions since 1970. When one party controlled both houses, the return was 11% under Republicans and 6% under Democrats. No matter who is in control, the 12 months following the midterm elections have been good for stocks — an average 13% gain for the 22 midterms since 1930. There were only two negative outcomes: 1930 and 1938.

Sounds pretty good in any event based on history, but there is no guarantee. Our recommendation to you is ignore the political campaign season that is gearing up in force right now and either go fishing or read Washington's Crossing. We guarantee that will be more fun than dealing with the mess of political advertising and media bombardment. And don’t forget to vote!

* Interesting side note: Brigadier General John Glover is one of the forgotten heroes of the American Revolution. He and his men, known as the Marblehead Militia amphibious regent, were responsible for ferrying Washington and his army on confiscated river coal ore boats across the river on that harrowing night. Any guess on Glover’s occupation when he was not delivering victory for our great nation? He was a professional fisherman!